Earlier this week I posted an article regarding the Saturday, March 4th, 2017 wiretapping allegations that were Tweeted by Trump. In that essay, I mentioned the timing of the Obama Administration’s two FISA requests to surveil Trump, including one which was approved in October 2016; and I wondered regarding Hillary Clinton’s knowledge of the matter:

Given the recent wiretapping allegations made by Trump, the timing of Hillary’s Halloween Tweet regarding Trump and the Russians now appears to be a very frightful coincidence….

What then, did Hillary know, and when did she know it?

Beginning at the 4:50 mark in the video below, Hillary Clinton’s 2016 Presidential Campaign Manager, Robby Mook, claims Hillary’s October 31, 2016 Tweet regarding Trump and the Russians was in response to an article posted by Slate Magazine that day:

OK. Here are some facts:

By my count, according to Hillary Clinton’s Twitter feed, on Halloween, October 31, 2016, she had 33 total Tweets which included 6 retweets.

Her Tweet # 15 for that day occurred at 11:51 AM and was the first Tweet of the day where she mentioned Russia’s “confirmed” election hacking:

U.S. intelligence has confirmed the Russian government is directing cyberattacks against the U.S. to influence the outcome of our election.

Hillary’s Twitter feed then runs forward, time-stamped, and in order. In her Tweet # 24 on that terrifying Halloween day, Hillary links to a Slate.com article written by Franklin Foer. 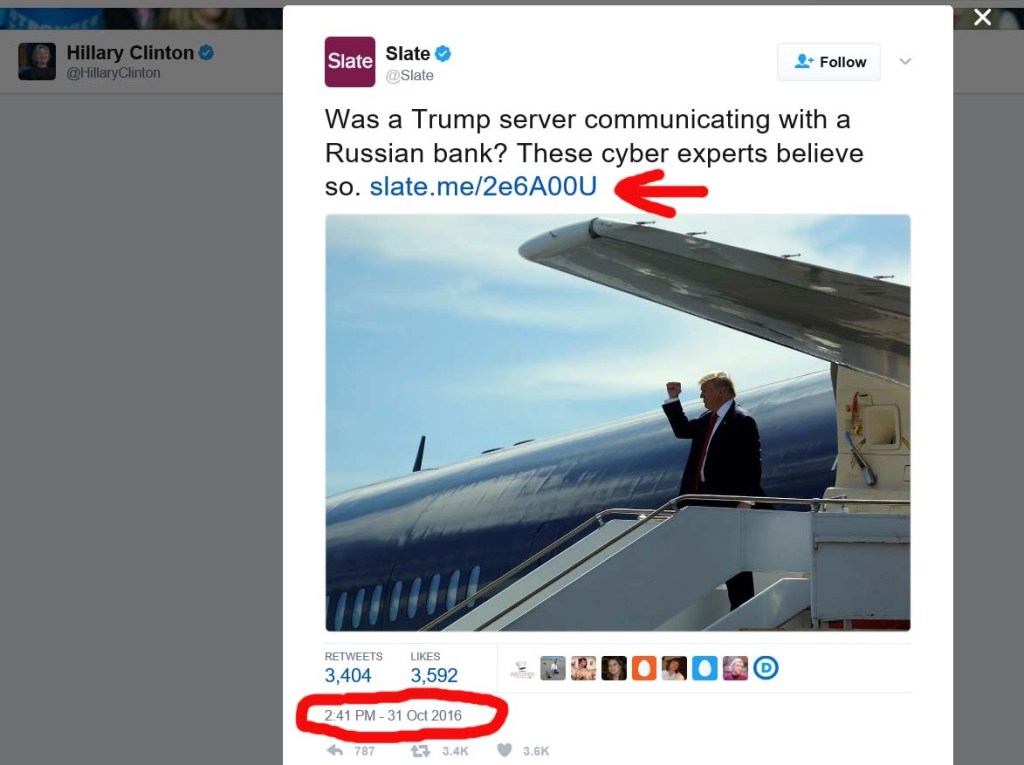 At 2:43 PM, Hillary (or someone on her team) Retweets the following from the author of the article, Franklin Foer:

I just reported: Donald Trump has a secret server…it connects to Moscow. 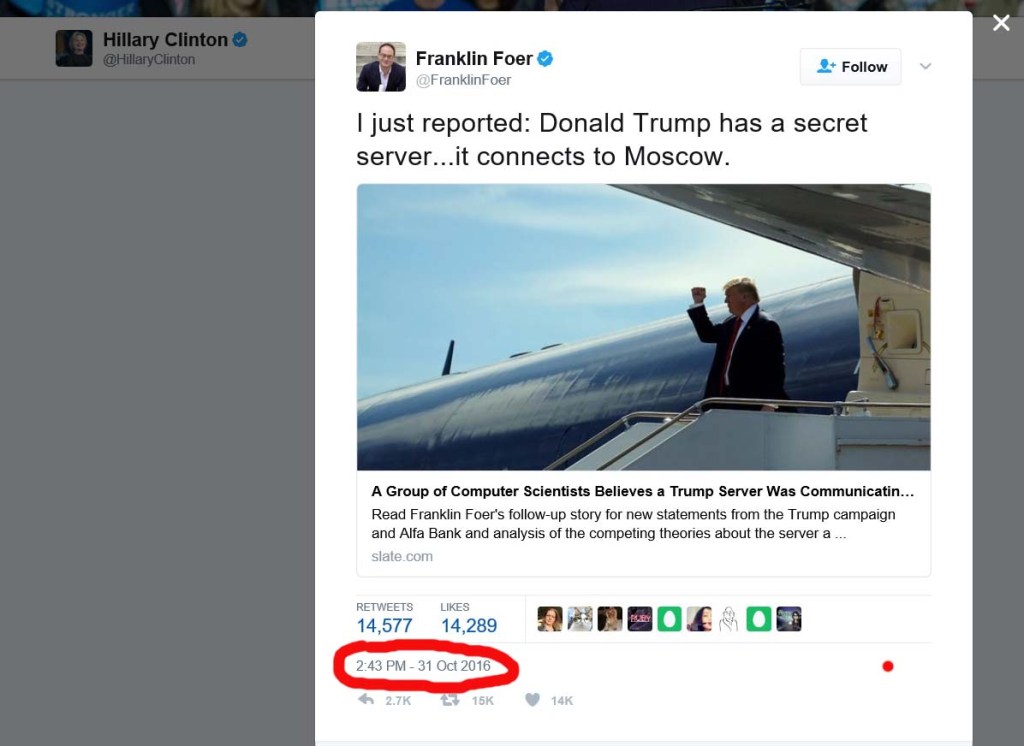 Sounds pretty sure of himself, doesn’t he?

But the article, entitled “Was a Trump Server Communicating With Russia?”, is time-stamped at 5:36 PM. 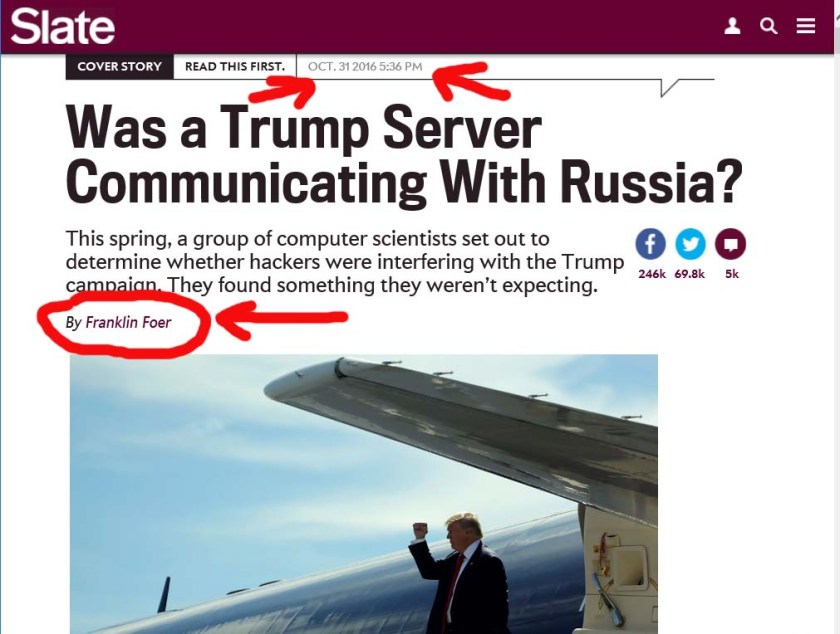 Does the fact that Hillary first Tweeted on Halloween morning something that wasn’t posted until later that afternoon make it a “smoking gun”?

If I am not mistaken, Hillary was campaigning in Ohio that day and Trump was in Michigan. Trump Tweeted only 6 times on Halloween and he made no mention of Russia.

Does Hillary’s Twitter feed timeline show her collusion with the Deep State in hacking the election against Trump?

According to Wikipedia, Slate magazine has its offices in New York City; and the author of the Slate piece, Franklin Foer, resides in Washington, DC; both in the Eastern Time zone.

Twitter is located in San Francisco, so, if the timestamps on Hillary Clinton’s Twitter feed is set to Pacific Time, then the above timeline may prove nothing. But, is that likely? What about Franklin Foer’s Twitter time-stamp(s)? I don’t Twitter, so I really can’t speculate as to the accuracy of Twitter Timing, or the variables involved with any individual account settings and options.

To be fair, if there was any collusion it may have been merely with Slate magazine and not the Deep State. Or, it could have been, simply, the harmless result of the Clinton Campaign being notified beforehand by Slate magazine regarding the forthcoming article that was about to be published that afternoon. I wonder if Trump was notified ahead of time?

Now, about that Slate magazine article which seemed so destined to frighten the American citizenry on that foreboding Halloween day: Therein, the following terrifying tale was told (emphasis added):

In late July, one of these scientists—who asked to be referred to as Tea Leaves, a pseudonym that would protect his relationship with the networks and banks that employ him to sift their data—found what looked like malware emanating from Russia. The destination domain had Trump in its name, which of course attracted Tea Leaves’ attention. But his discovery of the data was pure happenstance—a surprising needle in a large haystack of DNS lookups on his screen. “I have an outlier here that connects to Russia in a strange way,” he wrote in his notes. He couldn’t quite figure it out at first. But what he saw was a bank in Moscow that kept irregularly pinging a server registered to the Trump Organization on Fifth Avenue.

All of this is especially interesting in light of the recent WikiLeaks Vault 7 revelations and the program entitled UMBRAGE whereby American intelligence agencies are now known to have the ability to mimic internet hacks from other countries:

The CIA’s Remote Devices Branch‘s UMBRAGE group collects and maintains a substantial library of attack techniques ‘stolen’ from malware produced in other states including the Russian Federation.

With UMBRAGE and related projects the CIA cannot only increase its total number of attack types but also misdirect attribution by leaving behind the “fingerprints” of the groups that the attack techniques were stolen from.

­­­­­­­­­­­­In this article, we read the following frightening fiction (emphasis added):

In June, the former Western intelligence officer—who spent almost two decades on Russian intelligence matters and who now works with a US firm that gathers information on Russia for corporate clients—was assigned the task of researching Trump’s dealings in Russia and elsewhere, according to the former spy and his associates in this American firm. This was for an opposition research project originally financed by a Republican client critical of the celebrity mogul. (Before the former spy was retained, the project’s financing switched to a client allied with Democrats.) “It started off as a fairly general inquiry,” says the former spook, who asks not to be identified. But when he dug into Trump, he notes, he came across troubling information indicating connections between Trump and the Russian government. According to his sources, he says, “there was an established exchange of information between the Trump campaign and the Kremlin of mutual benefit.”

So, why did all of this break on that very frightful and fateful Halloween, just eight days before the Presidential Election of 2016?

Well, consider that Hillary Clinton was smack in the middle of her SECOND Weiner Scandal on that horrible Halloween; except this one did not involve a White House intern’s haunting blue and ghostly white-splattered dress jumping out of nowhere. No, on Friday, October 28th, 2016, it was the Headless Horseman, James Comey, who delivered a nasty letter to Congress regarding Hillary’s missing e-mails that were discovered within the engorged hard-drive hidden beneath Anthony Wiener’s overheated laptop that sprung to life like Ichabod Crane’s reanimated pumpkin.

What started on Friday later began on Monday.

However, Monday delivered a different kind of Halloween. An All Hallows’ Eve more sinister and serious where masks were torn away and the long knives came out instead.