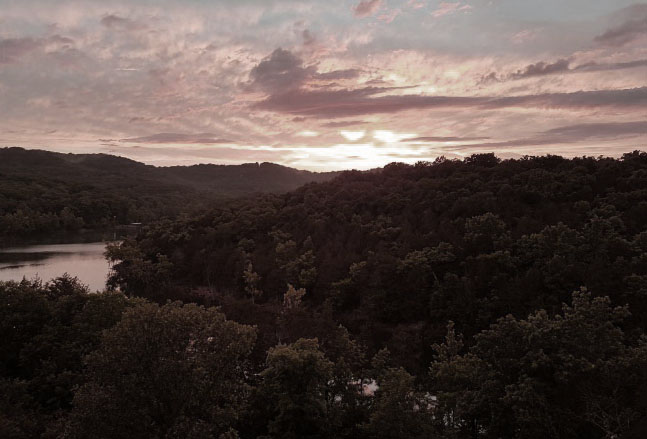 One evening, while in college, I attended an extracurricular lecture held by my college adviser on nuclear proliferation. It was a concern that was close to his heart and I admired his “doing something about it” at the time.

During his talk, he shared the parable of “the frog in boiling water” and it was the first time I had heard it told.

Essentially, it boiled (pun intended) down to this:

The lesson from the story?

For me, it was this:

Inattention and complacency kills; gradually by degree at first, and then all once.

I believe this applies to people on a personal basis as well as on a grander scale. Consider how much we have progressed since Y2K.  After 911, I became that frog in the water before I jumped out and went Galt ten years later, in 2011.  It was around the time the tsunamis struck Japan and a few months before Ann Barnhardt jumped ship. I couldn’t stop the boiling all around me, so I got out.

For the next several years though, a sort of paralysis set in that was brought about by my anger and fear.  In a sense, I was boiling still, but in a different way; from the inside out, as it were, as I’ve seen others do also.  Earlier this year, I wrote about some of that in another essay, regarding the importance of honesty and how I leaped from that latest boiling pot:

I began to recognize the pride behind my fears…  a type of pride that led to resentments and anger.  Beneath all mad is sad and underlying both is fear.  I began to think about faith; how faith without works is dead.  In my own case, therefore, faith became right action; deeds more than words.

…..All I have to do is try my best every day. Seek truth, speak the truth to the best of my ability, and take right action in the hopes it will benefit others; including some I may not ever know.

Some of that is why I started my blog in September of 2016.  It was something I could do; even if I did believe that Hillary was going to win the presidency two months later, and after that, it would just be a matter of time before the Stormtroopers darkened my door.

Even so, my decision was made and any caution thrown to the wind. If I became a dissident who was targeted, so be it. If they tortured my family in front of me, or pulled out my intestines like Braveheart, that would be “on them” because I had chosen; and I wasn’t fooled.

Looking back, I’ve come to realize in the ten years from around 2006 to the fall of 2016, I was working through my discontentment like the Kübler-Ross five stages of grief:  Denial, anger, bargaining, depression, and acceptance. 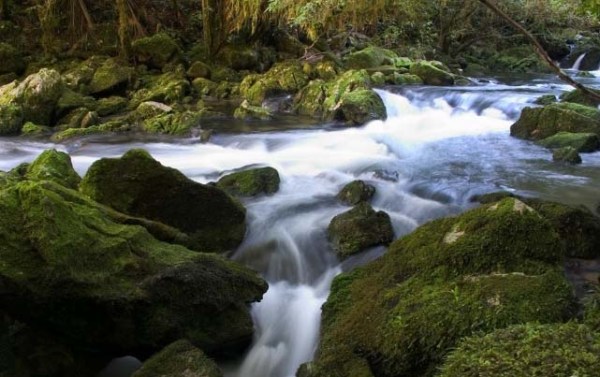 Yet, even now, I still can’t decide if acceptance is surrender by acquiescence or a best-option retreat by way of jumping out of the boiling pot. Or maybe those two constructs aren’t necessarily separate at all.

In any case, there is a certain amount of acceptance that must take place before action can be taken; for either good or bad.

This is the 100th original article I’ve posted since I started my blog in the fall of 2016.  Ironically, my thoughts are out of focus currently and I am not sure exactly what I am trying say; even now as I type.

In many ways, I think I may have said all I can – of that which I am willing to share online, and I don’t wish to repeat myself. Honestly, I’m not sure if I could say anything better than I have already.

At this time, I don’t know.

In the fall of 2016, Donald Trump’s speaking to truth to power inspired me.  However, unless I’m missing something, he now appears powerless to reverse the tide.

Deep down, I may not have expected him to make America great again anyway. He’s just one man.

Nor am I surprised at the Orwellian media censorship taking place today.  Again, it was just a matter of time.  Even if Trump is real, and not a TV actor, he can’t tell corporations what to do, per se. Neither can he slow the force and flow of the overwhelming and inexorable stupidity flowing from therein and all around.

There isn’t much I can do either.  It is frustrating; and acceptance feels like losing, or rather, boiling in hot water.

Subsequently, I will do what I can each day through positive action on behalf of myself and others, as opposed to the wicked deeds that would satisfy my prideful soul.

It’s my leap of faith, if you will.

For a while now, I have chosen to be mentor for my county. Some of my duties include assisting individuals in youth facilities, treatment centers, and the jail. Over the past week, I helped a guy find a decent car for $1,000. Not easy.  I also help to set up meetings where alcoholics and drug addicts can speak to one another and I’ve had two acquaintances over the last month, who I knew from that endeavor, succumb to the Great Beyond: One from liver failure and the other by suicide.

The liver failure was a 30-something gal with children who wasted many opportunities and she actually sort of reminded me of an older Amy Winehouse.  Winehouse was a British jazz and pop singer who boiled to death in her proverbial “pot” around the time I jumped from mine, in 2011.  In the now-deceased singer’s eponymously entitled documentary, “Amy”, footage of her is shown on the night she won a Grammy Award.  Beneath that footage, a voiceover of her best friend spoke of how Amy lamented being sober on the night she won that Grammy because everything was “so boring without drugs”.

Which, for me, raises the question:  Why can’t each day be sufficient?

What’s wrong with the sunrise and why is sunset never good enough?

Recently, headlines were made when an airline employee, by the name of Rich Russell, stole an empty airplane and used it to commit suicide on an island near Seattle, Washington. Russell “chalked up” his actions to the frustration of making minimum wage and for being a “white guy” in a politically correct world.

Once one reaches the mindset of “all is meaningless”, they may fail to realize the anger behind that. And, from there, the spirit of “what the fuck” takes flight. At the very end, though, that anger will bring anyone down in flames; their hair on fire. It possible Rich destroyed himself because he didn’t want to hurt anyone else. Or maybe even that didn’t matter to him anymore.

It’s true that resentment is a misplaced form of revenge; a bitter, poison pill that we, ourselves, swallow.

If only this person, or situation, were different.  If only my job were better and I made more money. If only Hillary would go to jail.

If only the Deep State would wither on the vine.

We hold onto these things and will not release them even after they become nooses around our necks.

Why not just trade them away?  To do so, is akin to jumping from a pot of rapidly heated water.

The 2006 film, “Babel”, starts out with two Arab’s negotiating a deal on a rifle. It’s a fascinating exchange with techniques as old as time.  A similar process can be seen in the 2010 movie, “Wall Street 2, Money Never Sleeps”, whereby Gordon Gekko (played by Michael Douglas) leaves prison a pauper and shrewdly leverages one personal exchange at a time on his way to another billion bucks.

It may seem complicated, but there’s nothing that is simpler. For whatever reason, we’ve made it too hard.

What can I do for others today? What can they do for me? How can we work together through honesty and right action?

I remember reading once that girls and boys have differing primary concerns but, in essence, they are similar.  Girls want to be loved and accepted for who they are and boys want to know that they “have what it takes”.  These answers will not be found on social media.  On the contrary, they must be realized live and in person.

It means, boys and girls, we have to show up.

The author and philosopher, Ayn Rand, once said:  “Worry is the inability of Man to deal with his existence”; or similar to that.

Worry is just fear. It is thinking and thinking isn’t doing.

You’re never lost until you become afraid.  Until then, you just don’t know where you are.

As for me?  I can build a fire, catch fish, filet them, and cook them.  I’ve shot deer but I’ve never skinned one. Fortunately, I have friends who can do it in the dark while “half in the bag”.  I might learn soon enough.

I’ve never killed another human being and I hope I never will.  On this last Fourth of July, I did kill an angry groundhog in my mother-in-law’s machine shed with a pitchfork and a shovel.  It was like taking out the trash and I felt nothing.

Would it have felt the same if it was someone from Antifa trying to burn down my, or my neighbor’s, house?

I want to believe I would feel overwhelming remorse in the event of killing another human being but, at the same time, part of me fears I won’t feel it any more than I do with the other, lesser mammals.

What would that make me? I hope I never have to find that out.

In the meantime though, I’ll just choose to be grateful.  They say serenity is when your mind and body are in the same place.  That time is now.

I’m grateful for the sunset. 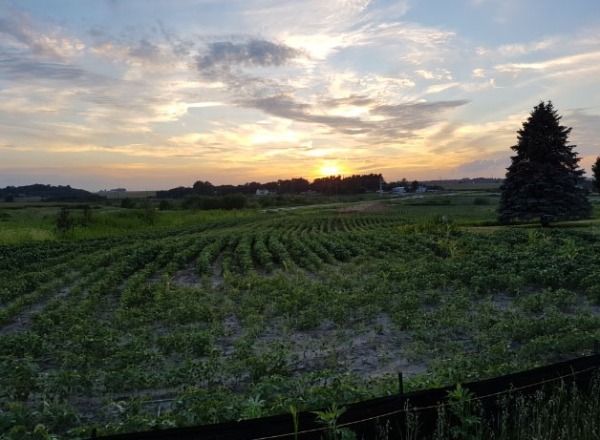 I enjoy walks with my loved ones.

And I appreciate freshly harvested, rinsed, and spun lettuce.

Yesterday is gone except for the memories and words spoken.  For the ones I’ve lost, their actions mattered more.  What does that mean for tomorrow when tomorrow’s not here?   What can you do today?  What will you do? It’s all that matters.

Eventually, all things merge into one, and a river runs through it. The river was cut by the world’s great flood and runs over rocks from the basement of time. On some of the rocks are timeless raindrops. Under the rocks are the words, and some of the words are theirs.

I am haunted by waters.

― Norman Maclean, A River Runs Through It and Other Stories