Life is hard as it is. Too many rough roads to travel. Too many chains to untangle. But no matter how cruel the world may be, life becomes less hard when you got a good friend.

True friends say good things behind your back and bad things to your face.

In the late nineteen-forties, three young men graduated college, packed their gear into a Willys four-by-four and took a road trip into the Canadian wilderness where they built a log-cabin. They felled trees by hand and used nineteenth-century tools to construct the cabin of such quality, it was shared by multiple generations of their three families over the next five decades.

As one born in the turbulent sixties and growing up in the nineteen-seventies, I was lucky enough to catch the tail-end of a time when boys were boys and men were men.  It was also very fortunate that my childhood best friend’s father was one of the three men who built the cabin.  It had a wood stove and an old-fashioned hand pump in the kitchen that drew water directly from the lake. An outhouse was positioned around 30 yards from the back entrance and the front porch offered limited views of the water through veritable walls of trees.

Usually a group of four to six of us would drive more than a day’s time to reach the cabin and our party generally consisted of two or three seasoned older men and a similar number of us young bucks.  And, every visit, we spent about the same amount of time repairing, maintaining, and improving that old cabin as we did fishing.

We cut down trees and built a bigger boat ramp, assembled docks, listened to the loons at sunset, and witnessed the Milky Way in all of its glory, in the enchanting black of night.

Once we young bucks were of a certain age, we’d chug a beer, do a shot, or both, and burn ticks and leeches from our bodies with freshly extinguished match tips. Many times we missed the targets.

Another time, four of us arrived at the cabin on a Sunday and realized we forgot to buy beer before crossing the border. Canada didn’t sell beer on Sundays. So, after cursing ourselves, and much weeping and gnashing of teeth, we waited impatiently until the next day.  Once again, we made the trek into town that Monday which, to our combined horror, just so happened to be Victoria Day. Canada didn’t sell beer on Victoria Day either. Fortunately, we were able to persuade a fly-n-fish charter service to illegally sell us a case for $50 USD; which, back then, was about four to five times the price south of the border; depending on the brand.

On another trip, after we cut out a bunch of rot from the cabin’s exterior and painted the entire structure barn red, I stepped out to piss over the railing of the front porch after midnight. The next morning, I woke up and saw my Fruit of the Looms were red.  Blood red.  Momentarily forgetting the previous day’s painting, I panicked and started stumbling around and swearing worse than a drunken Andrew Dice Clay at a feminist rally.

Everyone came running my way all at once and, when we figured out what had happened, I’ve not since heard a group of guys laugh as hard. Close, on many occasions, but no cigar.

Although that old cabin and the older men are gone now, we middle-aged bucks still laugh about those incidents and many other similar events, to this very day. But having moved away many moons ago, I don’t get to see those old friends as much.  Even so, I think of them often.

Much of the vitality in a friendship lies in the honoring of differences, not simply in the enjoyment of similarities.

In a way, you are poetry material; You are full of cloudy subtleties I am willing to spend a lifetime figuring out. Words burst in your essence and you carry their dust in the pores of your ethereal individuality.

Around 13 years ago, in a new area, one of my newer friends there introduced to me to a guy who was actually my neighbor. The friend who introduced us, commissioned my (previously unknown) neighbor to work on various classic cars. It turned out that my new acquaintance’s place was hidden in plain sight and within walking distance of my homestead: just a left, a right, another right, a left, a right, and another left away from where I lived.

As alluded to before, I grew up in the fading ether of the Norman Rockwell era. Although my small hometown wasn’t exactly “American Graffiti” it wasn’t too far off. We had a drive-in and a main-drag where all the kids would cruise. Of course, the “strip” was aligned with gas stations that were full of blue-jean adorned dudes wearing t-shirts, smoking cigarettes, and talking shit to one another.

Over time, I became friends with that neighbor. He would do work for me, I would help him out when I could, we’d do lunch on occasion, and some mornings he would catch fish and invite me over for some freshly filleted and fried breakfast.

Imagine our mutual surprise when, after a time, I learned that his father was one of the original three men who built the aforementioned cabin in Canada. Moreover, after we made that connection, we both acknowledged a vague recollection of each other as kids spending one night’s overlap there between family stays.

It was really cool when I found some pictures of his Dad and me fishing together. He looked at the pictures, smiled, and said:  “Yep! That was Dad”; and we both shook our heads in wonderment.

What a small world.

Through the years, I have enjoyed hanging out at my neighbor’s place. Although some might call him a hoarder, I tend to look at him more as a collector; perhaps because I understand his…, shall we say…, eccentricities.

He’s rebellious, but also a first-rate mechanic, an old soul with artistic sensibilities, and possessing a childlike innocence that is infectious to say the least. I can spend hours at his place and it, truly, feels like traveling back into a friendlier time.

He’ll talk your ears off, but will usually get the job done on schedule; as long as he doesn’t become distracted by the next project too soon. He’ll be poor for a stretch and then he’ll sell some car to another rich guy from Minneapolis, or Chicago, or Los Angeles, and be flush again for a while.

Although he’s had a common-law wife for decades and they never had children, he remains a cross between man’s man and a big kid; with his house and shops appearing as a combination taxidermy museum, circus show, and auto-auction all rolled up into one hell of a good time.

When I said “shops”, I used the plural because they’re a maze of connected buildings, separated by layered plywood doors with fabricated locks and handles made out of recycled tools, chrome-plated fasteners, rusted bolts, and old springs. He has multiple vehicle hoists, a paint booth, parts storage, a circa nineteen-eighties Sinclair gas pump from back when gas was a dollar a gallon, and an empty thirty cent Pepsi dispenser. 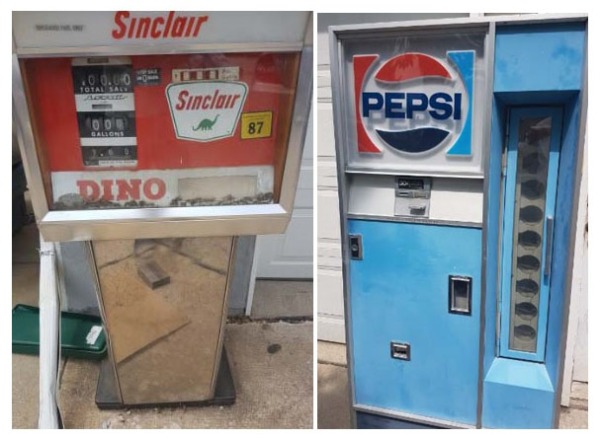 In his living room, he has a gravity-worn leather sofa, haphazardly patched-together stereo equipment, a pinball machine, and a “Your Wate and Fate” character reading and prophecy device that I’ve yet to try. 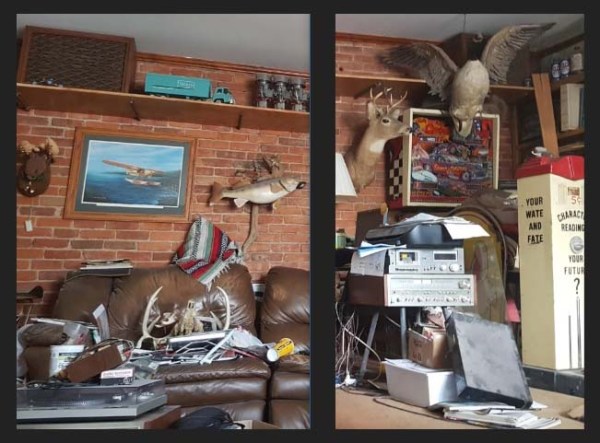 I’ve seen him take a nineteen-fifties Bel Air sedan and turn it into a coupe, fabricate a welded metal hog’s head for his buddy’s smoker, paint the entire hood of a divorcee’s Toyota for $30, grind the rusted license plate bolts off my kid’s car, and throw in some smoked venison and homemade applesauce as a bonus just for stopping by.

In the time I’ve known him, we’ve both suffered physical ailments and healed; and we’ve cheered each other up when our ailments were mental. Some nights when I couldn’t sleep, I’d call over to his shop at 1:00 AM and, if he was still working, we’d go enjoy some breakfast at a local 24-hour restaurant.

We’ve also road-tripped with other friends – six of us in an early-nineteen-nineties Olds 88 to a small unincorporated town that would be impossible to find on purpose, or even by accident; and a bar there that served breaded tenderloins the size of hubcaps. Why? Because it was Tuesday morning. That’s why.

I keep my friends close and my better friends closer. What are the odds of us finding each other out here in the random universe, all floating along like Forrest Gump’s feather?

I would say the chances were small. And that’s why I wake up some mornings feeling like I won the lottery yesterday; and with the anticipation that today could be even better.

We are the gold.

4 thoughts on “On Fishing, Friends, and Hidden Treasures Found”