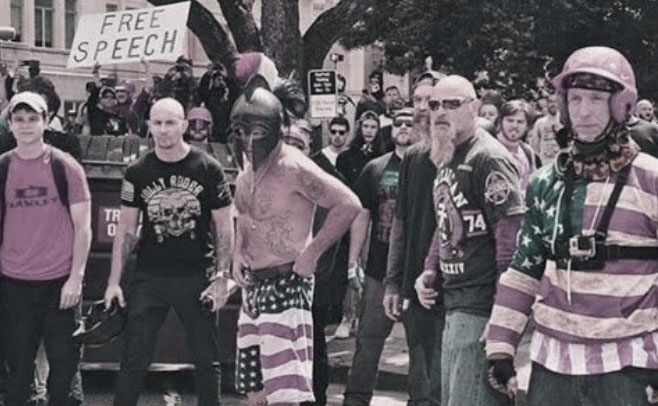 Regarding the upcoming election on Tuesday November 6, 2018, there can only be one of three possible outcomes:

The third result would, of course, be manifested as dramatic wins and losses for both Republicans and Democrats with either party coming out slightly ahead overall.

But given the perceived high stakes of this particular election as a referendum on President Donald Trump, the winners will be determined by those voters who fear the most. Certainly, there is much anger in this election, and that’s what happens:  When people become scared, they get angry.

Trump supporters fear losing their nation to globalism, open borders, offshoring, and politically correct fascism; which is just another name for Cultural Marxism.  Liberal Democrats on the other hand, don’t fear for America, per se, but rather their collective existence which requires everything mentioned heretofore that Trump supporters will vote against.

In other words, on Tuesday, some Americans will be voting for national sovereignty and to uphold the U.S. Constitution, whereas others will vote for a new world order, globalist orthodoxies, and economic redistribution by means of a powerful centralized government.

Regardless of who wins, however, there remains the possibility that the allegorical train has already left the proverbial station. Or stated another way, it may be America is already gone.

Consider the fact that U.S. corporations are now fascist.

Four months after Donald Trump was elected, The Washington Post adopted its slogan “Democracy Dies in the Darkness”.  That is, in fact, downright Orwellian because the Amazon.com titan, Jeff Bezos, attended the Bilderberg conference in Watford, Hertfordshire, England in June of 2013 and purchased the Washington Post four months later, in October 2013.  Within six months, even the liberal Huffington Post reported concerns over Bezos’ collusion with the United States Central Intelligence Agency:

The Post is supposed to expose CIA secrets. But Amazon is under contract to keep them. Amazon has a new $600 million “cloud” computing deal with the CIA. The situation is unprecedented….

Of course, the Washington Post had been a CIA Mockingbird publication for some time, under the stewardship of its previous owner Katharine Graham.  And, today, internet social media companies like Twitter and Facebook have also aligned with the Democrats, on behalf of the powerful, centralized state.

Even the world’s largest online search engine company, Google, uses the tagline “Don’t be evil”.  It’s just another Orwellian mind-trick because the CIA made Google:

In reality, Google is a smokescreen behind which lurks the US military-industrial complex.

Therefore, it is no surprise that Republican candidates have had their ads censored by the online behemoth during this election season.  As of this writing, the most recent example of the “Don’t be evil” company’s digital warfare on a GOP candidate took place on Tuesday October 30, 2018 when the following ad for Rep Marsha Blackburn (R-Tenn) was obviously deemed too effective for Google’s liking:

Hopefully, the reader will be able to view the 30 second video before Google’s YouTube platform takes it down.

In a free nation, when corporations like Nike go full Kaepernick, we don’t have to buy their shoes. And since Google really IS evil, we can just use another search engine.  Even better, in a free country, entrepreneurs can start up competitive companies and let the free-market sort it all out, right?

The online platform Gab was an alternative to Twitter and now it’s gone.  The excuse? A psycho shooting up a synagogue in Pittsburgh – although those who politicized that event obviously cared more for negating American’s First and Second Amendment rights than for those murdered. Gab says they’ll be back soon.  We’ll see. In any case, in a free nation, their viability should never have been questioned, let alone challenged, over unrelated circumstances.

During Brett Kavanuagh’s Supreme Court nomination process, the Democrats also completely bared their collective asses and looked like rats and fools to common sense Americans. When polls began to show an energized Republican base about to neutralize any hope for a Blue Wave, the Orwellian Media quickly switched channels to show the slow-motion Latin American invasion.  When that backfired as well, what happened next?  Shock and awe anarchy committed by a Cuban-Caucasian Native American Deplorable and an Anti-semitic Caucasian Never Trumper.

Do you believe in coincidences?

Next, the Orwellian Media reported the mail-bomber, and synagogue shooter, as exemplifying the decline of America under Trump’s incendiary rhetoric and divisive politics.

In response, Trump doubled down on the Orwellian Media as the “enemy of the people”:

There is great anger in our Country caused in part by inaccurate, and even fraudulent, reporting of the news. The Fake News Media, the true Enemy of the People, must stop the open & obvious hostility & report the news accurately & fairly. That will do much to put out the flame…

….of Anger and Outrage and we will then be able to bring all sides together in Peace and Harmony. Fake News Must End!

Whether or not the white Native-American mail-bomber was a patsy, or leftist operative, and even if the anti-Semitic synagogue shooter was a MK Ultra asset who answered his phone at just the right time – it doesn’t matter.  What matters most is how these types of events are always politicized by the Political Left and morphed into mind-control by the Orwellian Media. They are, in fact, the enemy.

Undoubtedly, the puppetmasters manipulate their puppets by perception. But it only works for so long because reality is inevitable.

Reality is that which, when you stop believing in it, doesn’t go away.

Therefore, it’s always a mere matter of time before the puppetmasters are seen as lying manipulators. Or, at the very least, the luckiest bastards ever to have published photos of a pristine white van, plastered with strangely unfaded pro-Trump stickers, owned by a whiter than average homeless Indian who just sent pipe-bombs to all of the modern-day heroes of the American Democratic Party.

Immediately, cell phone news applications like “Flipboard” were sending out all of the right information to all of the left people:  That the perp was a registered Republican, white-van-owner, and that…

A White Van Laden With Stickers Is at Center of Bombing Investigation…. One sticker has a Photoshopped image of President Trump standing on a tank, haloed by fireworks with an American flag behind him. “Dishonest Media,” and “CNN Sucks,” reads another one, the cable network’s logo affixed to it. And then there are the memes expressing support for the president and animosity toward his critics.

At the same time, CNN was calling the bomb recipients “Trump Targets” as the Orwellian Media breathlessly reported on how the incident had curtailed Republican enthusiasm in the midterms.  Also that the mail bomb story had successfully diverted attention from the Kavanaugh fiasco and the Honduran Caravan coverage; both of which we’re perceived as galvanizing Republicans.

Republicans are doing so well in early voting, and at the polls, and now this “Bomb” stuff happens and the momentum greatly slows – news not talking politics. Very unfortunate, what is going on. Republicans, go out and vote!

Call this blogger a paranoid tin-foil-hatter, but the whole Cesar Sayok Deplorable Mail-Bomber movie of the week seemed reminiscent of the Kavanaugh debacle. It was a classic in-your-face operation that screamed:

“Look what we can do whenever we want”.

At the same time, the failed bomb plot was perfect fodder to play as propaganda to the loony left who bought it all like they do Chinese junk on Black Friday.

When the conservative internet personality, Alex Jones, was banned from social media last summer, both he and the internet activist, Mike Adams, predicted false flags were coming prior to the midterms.   Adams exclaimed:

For the last two months, I’ve been warning about the rising risk of a major false flag attack taking place before the mid-term elections. The aggressive, unprecedented PURGE of Alex Jones / InfoWars underscores the desperation of the totalitarian deep state that’s about to make a move to eliminate President Trump and / or steal the elections…..

The radical Left is escalating its violence across America, and the tech giants are dramatically escalating their censorship actions to silence all independent voices that might question any “official” narrative. It all points to something big about to come down — something so big that only the official narrative can be allowed to be heard or spoken.

Adams has since identified the process as first the “vilification” of Jones, then the “censorship”, and then the operation as transitioned into the “kinetic phase”. We were also warned how the media shock and awe would be blamed on Donald Trump.  Without fail, all of it happened over the last several days and, conveniently, just prior to the midterms.

Adams’ prediction is also very chilling regarding the Honduran Caravan being turned into a kill zone in the days before the election. Remember, Trump said he would send in the military and the mob would NOT be allowed into the U.S.  There are now reports of 15,000 troops  gathering on America’s southern border.  If Trump keeps the caravan out by force, the Orwellian Media will have a field day portraying Trump as Hitler and the illegal invaders as Jews queued up before the oven doors.  At the same time, no questions will be raised as to how well-timed, coordinated, and sufficiently funded, was the caravan.  And if Trump allows the mob to cross the border, then his word will be shown as no good to his base.

Regardless, on any other week, NBC burying information that would have discredited Brett Kavanaugh’s accusers, and attorney Michael Avenatti being referred to the Department of Justice for investigation – would have been YUGE stories.  But that’s exactly how the Orwellian Media works.  They emphasize various propagandic narratives while simultaneously tossing any contravening reporting right down the memory hole.

It is nothing less than the electronic programming of the masses. Combine this with the censorship and memory-holed jettisoning of truth-tellers from online platforms, along with Google’s biased search engine reporting – and if there is a Blue Wave in a few days, these will be the reasons.

It seems heritage Americans, with their guns, now remain as the allegorical last man standing between the U.S. Constitution and all-out globalism.

Drive down any city street, in any neighborhood, prior to the vote on November 6, 2018, and you’ll see neighbors right next door to each other, and just across the street from one another, with opposing candidate signs in their windows and yards. This means these Americans are, literally, living and sleeping just yards away from their ideological enemies.

We are now in the soap box phase. On Tuesday comes the ballot box phase. Then, regardless of outcome, we will very possibly enter into the bullet box phase. Of course, that’s why the Orwellian Media requires endless news stories starring explosive projectile dispensers: To generate the necessary urgency to corner any criminals quickly followed by their immediate electronic prosecution, judgment, and sentencing.

The Democrats are afraid of guns, so they only want a powerful centralized state to have them. They also fear not being able to abort their babies, the weather (i.e. Climate Change), and transgenders losing their Obama-ordained bathroom privileges with your wives and daughters.

The Republicans fear the insanity of Democrats, the New World Order, and outcomes far more sinister than even Orwell imagined:

And Donald Trump has stated:

My whole life is about winning. I don’t lose often. I almost never lose.

The deck is stacked and the stage is set. Here’s what losing might look like:   Nancy Pelosi as House Speaker, Adam Schiff as Intelligence Committee Chairman, and Maxine Waters as head of the House Committee on Financial Services.

But even if Trump and the Republicans hold the line, it will have been just another battle in the long war.