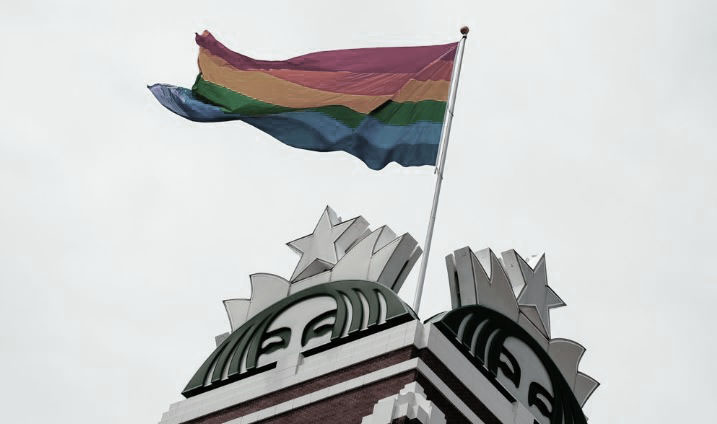 On April Fool’s Day of this year, I posted an article on how Coronavirus® has hastened the “old collectivism”.  That piece discussed Saul Alinsky’s tactics and how the current COVID hysteria is being manipulated by the Political Left.  My last post discussed how COVID-mania was successfully translated into Marxist hysteria following the death of George Floyd.

Certainly, America is under attack and what we are witnessing today serves as the mere preview for the main attraction that will commence on November 3, 2020 – if not before. The ongoing warfare is, of course, between those upholding the last remaining shreds of the U.S. Constitution against those who desire to raise the rainbow flag of globalism above the New World Order.

Whether history rhymes or repeats, it does so in cycles.  And nothing is new under the sun. Mankind’s desire to unite the world is said by some to have begun six millennia ago on the plains of Shinar, starting at the Tower of Babel.

In recent decades, especially, the birth pains of conflict were combined with the labor-inducing corollary of technological innovation and these have delivered new creations of collective centralization; to wit, the emergence of the League of Nations after World War I and the United Nations after World War II. And, surely, America’s current birth pains are about to deliver another new order.

Undoubtedly, the COVID crisis, in the minds of many, will prove the impotence of nationalism in the face of global concerns as the racial agitation will continue to subvert national unity. Ironically, even as urban areas crumble and burn, and amidst new lockdowns as a defense against a global pandemic, we’ll hear Black Lives Matter chants such as “Change Starts With Us” and how we’re “Stronger Together” while remaining six-feet apart.

It’s been said “the first casualty of war is truth” and this explains the “fog of war”.  It also explains why logic is no longer a factor in daily events; why WalMart and riots are immune to Covid, but not small businesses or Trump rallies; or why blacks must not be judged en masse, only cops.

It would appear, in the minds of many at least, that Trump is valiantly standing against the storms – and even the existence of upheavals like Russiagate, Ukrainegate, the politicization of COVID and the full-blossoming of identity politics into blatant Marxism – all seemingly support this view; as does in-party Republican attacks by The Lincoln Project (i.e. George Conway) and former Trump administration officials including Mad Dog Mattis and NeoClown Bolton.

To be sure, Trump is the most interesting man in the world right now and one wonders if that is the result of calamity or design. It could be both. Regardless, it remains to be seen if what unfurls next will more resemble the Spanish Civil War or the French Revolution. And one also wonders if it all may have been the result of contingency planning, or Game Theory, on a grand scale.

In the 4-D CHESS SCENARIO: Trump might be a real-reformer attempting to actually run the tables on The Globalist Cult.

This could play out as once written in James Clavell’s novel “Shogun”:  In that story, the protagonist was an English ship pilot captured in feudal Japan in the early 17th century. He survived and thrived within that culture, eventually rising to the court of a Japanese warlord named Yoshi Toronaga. The story culminated with a war between Toronaga and his rival on the council of regents named Ishido Kazunari.

In the narrative, it seemed Toronaga was being outmaneuvered and he even appeared to be mentally going off the rails as a result. Yet Toronaga’s loss of control was an act feigned in order to position for a final coup de grâce upon Ishido.

Similarly, what if Trump, in grand reality TV fashion, was wilting before the dark powers in order for them to drop their guard, overplay their hand, and expose their collective necks one final time?

Or, in the NAÏVE BUSINESSMAN SCENARIO, Trump may have had good intentions all along, but he vastly underestimated the power of The Cult and is now floundering and tweeting.  And, in so doing, Trump is actually serving the goals of the globalists; albeit unintentionally.

Or in, THE JUDAS GOAT SCENARIO: It could be that Trump is a crisis-actor hired by The Cult and has been utilized to smoke out the opposition (i.e. Deplorables/ patriots); while, at the same time, handing red, white, and blue-blooded Americans into FEMA Camps on a yuge silver platter with apples in their mouths.

As this is written, July 4, 2020 was yesterday.  Even now, fireworks can be heard in the distance.  Yet I’m wondering if America has run its course.  Or, rather, in the words of Ben Franklin:   We had a republic. We couldn’t keep it.

In this four-minute video below, American young people were asked questions about American history.  Listen to their answers and you’ll know how our nation was lost.  Even if you only have 30-seconds, start at the 3:54 mark and hear a teacher admit how she preaches the ills of racism in lieu of teaching her students history.

Perhaps, this, above all, describes America’s descent into a third-world country: The failure of education. Or, rather, more specifically, the transmogrification of education into indoctrination.

The first chapter of the book “The Abolition of Man” by C.S. Lewis, is entitled “Men Without Chests”. Therein, Lewis described “chests” as “the indispensable liaison officers between cerebral man and visceral man”. He added: “it is by this middle element that man is man: for by his intellect he is mere spirit and by his appetite mere animal”.

Lewis then forewarned of our dystopian future:

The right defence against false sentiments is to inculcate just sentiments. By starving the sensibility of our pupils we only make them easier prey to the propagandist when he comes. For famished nature will be avenged and a hard heart is no infallible protection against a soft head.

….We make men without chests and expect of them virtue and enterprise. We laugh at honour and are shocked to find traitors in our midst. We castrate and bid the geldings be fruitful.

So… the kids. Many, if not most of them are NOT alright. This, in fact, explains why America is not alright.

Many people may not realize that C.S. Lewis wrote “The Space Trilogy” as a fictional account of how the educational misconceptions as described in “The Abolition of Man”, would transition western civilization into a dystopian society.  Paradoxically, while working for the Manchester Evening News, George Orwell reviewed the third book of “The Space Trilogy” by Lewis. It was entitled “The Hideous Strength” and Orwell claimed that Lewis’ book “would have been stronger without the supernatural elements”.

Think of a country where people were admired for running away in battle, or where a man felt proud of double-crossing all the people who had been kindest to him. You might just as well try to imagine a country where two and two made five.

Now those words were included in Lewis’ 1952 book “Mere Christianity” and “1984” was published in 1949, but the former book was a compilation of publications written by Lewis from 1943 – 1945 (that were derived from even earlier speeches & radio broadcasts).

So, I’m thinking Orwell’s 1984 (2+2=5) might have been written in response to Lewis – about a world devoid of logic and morality, except without the “supernatural elements”.

If anything, perhaps the writings of these mid-twentieth-century intellectuals demonstrate how a nation’s spirit might be addressed by the application of principles (laws?) like truth, honesty, courage, discernment, temperance, and discipline – as opposed to deception, deceit, cowardice, moral relativism, lust, and greed.

Yet still today, in America, many people in both business and government conduct themselves with honesty, courage, and integrity.

It’s how I roll and I believe most of you now reading this do as well.

Nevertheless, here we are.

A PERSONAL NOTE to readers of this blog (and on The Burning Platform):

I’ve had some people reach out to me via e-mail and the contact page of my blog, asking why I’ve been posting fewer articles this summer.  Some have asked if I’m OK.

I am fine.  My online contributions have diminished this past month, in part, because I’ve been engaging in three dimensions, getting things done. So I will (mostly) be otherwise involved with projects through the middle of August. It means I will be posting few (if any) articles during this time and my commenting will also be limited.  However, I will still be perusing all my favorite online sources daily.

In any event, thank you for reading and being “there”.  I’ll be right back.

One thought on “Dystopian Societies Derive From Displaced Ethics and Values”