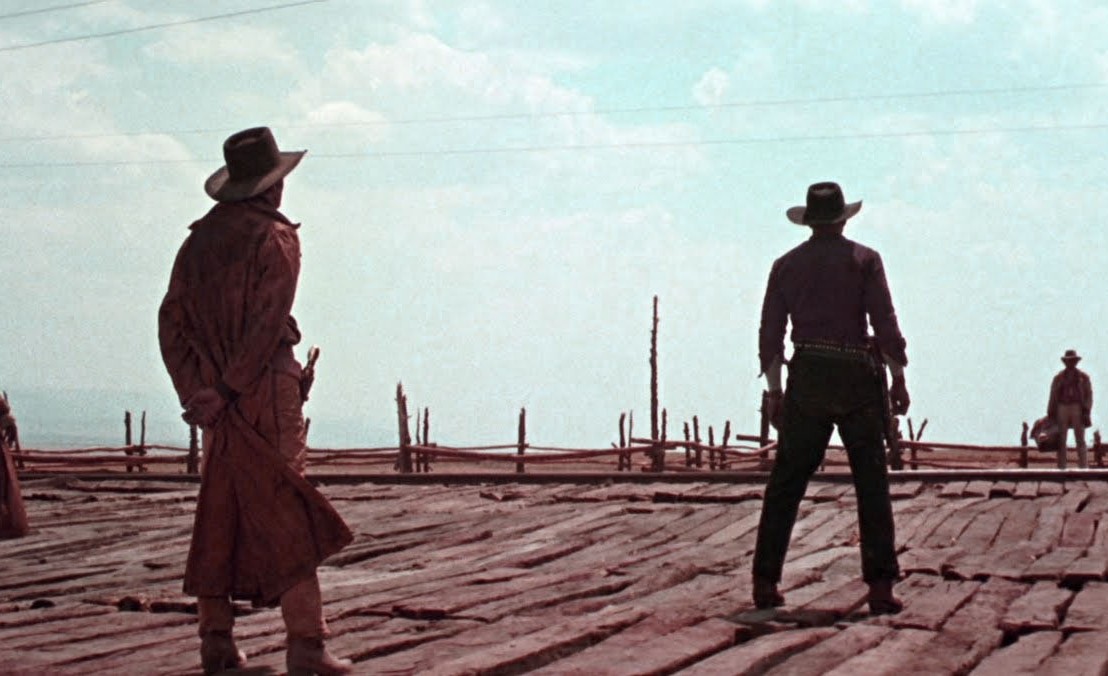 A war can begin slowly. And quietly. Decisions are made and strategies implemented as outcomes unfold. Assessments are analyzed; tactics remain fluid and adjustments are tweaked as every action elicits an opposing reaction. As time progresses, it becomes easier to discern the enemy as the battle lines become more defined.

Originally, I was going to entitle this essay “Enemies of the State”, but the more I thought about it, the more I realized how the geopolitics of today resembles a 1960s Spaghetti Western.

The promotional trailer of Sergio Leone’s epic 1968 film, “Once Upon a Time in the West”, alludes to: “the widow, the outlaw, the gunman and the man in search of a name”.   Unless one takes the time to view the entire two hour and forty five minute film, it would be impossible to understand the characters or their individual motives, especially, regarding the protagonist as played by Charles Bronson.

The same can be said when reading today’s headlines. There are the mainstream media’s promotional marketing of specific narratives and stories; and then, there are those who are actually watching the denouement of the plot in real time.

Try this experiment: The next time you are around someone you know who is engaged in American politics, ask them if they have heard of Pizzagate. When they say “no”, ask them if they have heard of any accusations of pedophilia against Hillary Clinton’s 2016 presidential campaign manager, John Podesta. In my own experience, in every instance, these “engaged” people who vote, surf the net, read newspapers and follow the daily news on television, or even talk radio, are clueless.

At Thanksgiving, I asked people who actually have e-mailed me political perspectives prior to the election, on both the political Right and Left, their opinions of “fake news”. A few knew of the Google and Facebook measures that were reported upon immediately after the election, but other than that, they didn’t have much to say. However, this changed the day after Thanksgiving because on Thanksgiving Day, the Washington Post published their now infamous propaganda hit piece on alleged “fake news” websites using research from the now discredited “PropOrNot” group that “insists on public anonymity”.

Consider all of the plot twist and turns we have experienced since Thanksgiving. Under threat of lawsuits from the falsely accused, the Washington Post offered a retraction of sorts on December 8, 2016, and distanced itself from the PropOrNot liars. Ironically, the very next day, Hillary Clinton, dressed in purple and looking like she just returned from a private Prince concert in the afterlife, called fake news an “epidemic” in a speech on Capitol Hill for the retiring Nevada Senator, and fellow member of the undead, Harry Reid. Hillary said:

The epidemic of malicious fake news and false propaganda that flooded social media over the past year: It’s now clear that so called fake news can have real world consequences. This isn’t about politics or partisanship. Lives are at risk, lives of ordinary people just trying to go about their days to do their jobs, contribute to their communities; it’s a danger that must be addressed and addressed quickly. Bipartisan legislation is making its way through congress to boost the government’s response to foreign propaganda and Silcom Valley is starting to grapple with the challenge and threat of fake news.

Even more interesting is what Broomhilda did not say. Zero Hedge put it this way:

While Clinton did not mention “Pizzagate”, her comments appeared to directly reference the story that implicated her former campaign chairman, John Podesta, and lead to a man with an assault rifle firing a shot in Comet Ping Pong, the Washington shop that has been implicated in the online conspiracy theory.

Did you also notice how Hillary, in her little speech, transitioned “fake news” into “foreign propaganda”? Very smooth. Pandora’s box has really let the cat out of the bag and opened a can of worms on this one. Now ten electoral college electors want a briefing on Russian interference in the 2016 election before they cast their presidential vote.

Furthermore, there appears to be a civil war raging in the halls of high government. During the election it was the FBI against the Justice Department; but now, the showdown is between the FBI and the CIA. According to an article in the Washington Post, the CIA says Russia “quite clearly intended to help Republican Donald Trump defeat Democrat Hillary Clinton and clinch the White House.”

However, in remarks to lawmakers on the House Intelligence Committee, the FBI was not convinced of these claims. In other words, they were “fuzzy” and “ambiguous” regarding what the Washington Post has termed “the Kremilin’s elusive fingerprints”.

Have you ever noticed how “Kremlin” rhymes with “gremlin” which is defined as a mischievous invisible being?

The Washington Post also describes these divisions in the high offices of government as occurring because the FBI demands “facts and tangible evidence” as opposed to the CIA being more comfortable “drawing inferences” and that “high confidence” for the CIA means “we’re pretty damn sure” but it doesn’t mean “they can prove it in court.”

In fact, if you review the Washington Post article as linked above, it reads like they believe the Russian Connection to be a fact and, they, with the help of the CIA, will misrepresent any accusation and extort every angle to make Donald Trump guilty of espionage. Oh, if only the Washington Post had put forth such an effort with Hillary Clinton’s e-mails. It makes one wonder, doesn’t it?

In the meantime, Donald Trump claimed the Russian’s involvement in the 2016 election to be the real “fake news” while the White house has accused Trump of treason. Indeed, on December 12, 2016, White House press secretary, Josh Earnest, accused the President Elect of actually requesting Russia’s assistance to cyber hack Hillary Clinton.

This is a very serious charge. How long do you think it will be before solid evidence is presented to back up the claim? Be prepared. Here, I believe the Z-man offers an astute observation:

Never mind the absurdity of the claim. Think about where that leads. What limits are there on what you can do to stop a traitor from harming the country? Obviously, you can say anything horrible about them you like, in an effort to damage them.

What better way than to discredit your political enemy, garner support from the body politic and, simultaneously, satisfy your lust for war with a foreign power? Yet these are the goals of the globalists. They are already at war with Russia in Ukraine and Syria so, in their view, the desire for peace is treason. This means Donald Trump is now considered by the Deep State to be a traitor to his country.

Recently, Congress passed H.R. 6393, a bill targeting “Russian Propaganda” websites. A few weeks before, the House passed the “Caesar Syria Civilian Protection Act of 2016” which requires “an assessment of the potential effectiveness, risks, and operational requirements of the establishment and maintenance of a no-fly zone over part or all of Syria”.

The globalists want war and they want it soon. To them, Trump is merely a speed bump.

A showdown is occurring, like “Once Upon a Time in the West”. In the film, the battle was over Sweetwater, a piece of land near the fictional western town of Flagstone. A crippled railroad tycoon sends his hired guns to intimidate the rightful owners of Sweetwater to sell the land so the railroad can obtain the water there in order to service its steam locomotives. Instead, the leader of the hired guns, played by Henry Fonda in a role personifying pure evil, kills everyone, including the children, in a pre-planned effort to frame an outlaw played by Jason Robards.   Enter a mysterious, unnamed, harmonica playing badass, portrayed by Charles Bronson, with motives of his own including an unquenchable thirst for revenge.

Just like in the film, the sides have been chosen. Over there, we have the Amazon: Jeff Bezos, a Bilderberg approved hired gun who attended the Bilderberg conference in Watford, Hertfordshire, England in June of 2013 and later purchased the Washington Post in October, 2013. This hired gun has no appreciation for the little people as he forces his employees to sleep in tents or be fired this holiday season.

On the other side, we have a President Elect who doesn’t approve of the way the hired gun conducts his business. Moreover, a showdown looms ahead this coming Wednesday, December 14th, 2016 in the form of a technology summit.

Meanwhile, the Clinton Campaign, along with the Senators Ben Cardin (Md.), Dianne Feinstein (Calif.) and Patrick Leahy (Vt.), the top Democrats on the Foreign Relations, Intelligence and Judiciary committees, are all backing the creation of an independent commission to investigate Russia’s interference with the 2016 election. It doesn’t seem very “independent” to me, but they seem to think they can’t lose, with the Maverick, John McCain, on their side.

It’s Once Upon a Time in the West. The elite globalists are like the crippled railroad tycoon sending hired guns to intimidate the patriotic and nationalist Americans into selling their land of Sweetwater so as to feed the global, one-world driven locomotive. The hired guns care not for truth, liberty or law as they pull their triggers on little children and attempt to frame the outlaw nation of Russia. Yet, there is one standing in their way with motives of his own.

Plots often begin slowly then build through violent crescendos before the ensuing final showdown. Wars can begin with a whisper and secrets revealed in a final, dying gasp. Motives are often not what they seem and the only way to fully understand them is by watching each action, and reaction.

Evil exists in the hearts of men and heroes are often not whom we would expect. Sometimes, love affairs aren’t meant to last and other times, evil is packaged in surprising forms; perhaps even looking like Henry Fonda.

As Jason Robards tells Charles Bronson near the end:

“when they do you in, pray it’s somebody who knows where to shoot.”

Yes, archetypes and untypical heroes make movie magic. In real life, however, the blood is real and there are no retakes. The stakes actually matter. It is life and death. One side is going to win. But unlike the movies, we won’t know until it’s over.