When I first had the idea to write this piece, it was going to justify my own overwhelming sense of foreboding regarding future events that, to me, seem as inevitable as gravity drawing water down a drain. I wanted to defend my perspectives against those who still have hope. First, I would parse the meanings of pessimism, fatalism, and realism, and then use persuasive language to show how I was merely being honestly realistic because math.

I was going to entitle the essay “Embracing Realism with an Attitude of Pessimism and a Foreboding Sense of Fatalism” and demonstrate how I was not a pessimist or a fatalist per se, but rather a realist.  I would then use that construct to demolish any remaining hope still aflame within the hearts of the readers; as a favor to them.

In fact, I even conducted an informal poll to sample the perspectives of awakened and like-minded online travelers.  Like the flicker of lanterns in a dark wood, the glint of moonlight from metal on a mountain trail, or a midnight campfire tossing sparks into heaven – I was surprised to see that hope still shined for 6 out of 10 red-pilled wanderers traveling through the entropic cosmos, beyond the great digital divide.

I actually speculated the Skeptics would outnumber the Believers, but that was not the result.

Therefore, this essay will be different than what I had originally envisioned.  It will, instead, be a tribute to a brilliant Pulitzer-nominated novelist who hung himself in 2008.

1 : an inclination to emphasize adverse aspects, conditions, and possibilities or to expect the worst possible outcome

2 a : the doctrine that reality is essentially evil

b : the doctrine that evil overbalances happiness in life

Whereas Merriam-Webster’s first definition of pessimism regarding “an inclination to emphasize adverse aspects” would seem indicative of attitude, or personal perspective, the secondary definitions appear to actually flirt with fatalism:

: a doctrine that events are fixed in advance so that human beings are powerless to change them; also : a belief in or attitude determined by this doctrine

Consequently, if I were to be completely honest in my consideration of future events, I would say my fatalistic mindset was a result of realism:

1 : concern for fact or reality and rejection of the impractical and visionary

2 a : a doctrine that universals exist outside the mind; specifically : the conception that an abstract term names an independent and unitary reality

b : a theory that objects of sense perception or cognition exist independently of the mind — compare nominalism

3 : the theory or practice of fidelity in art and literature to nature or to real life and to accurate representation without idealization

In other words, I would be pessimistic regarding inevitable (i.e. fixed in advance) forthcoming future tribulations because of the reality of current circumstances; in the same way common sense tells me an omelet will be bad even if only one of the eggs is rotten, let alone the entire batch.  Call it extrapolation or inference from evidence, or fatalism (i.e. determinism), or by any other terminology – in any contingency, the future is NOT unknown because it’s coming; or rather, the future’s inevitable arrival is known.

Then I started thinking about language and entropy, and math, and the phrase “so it was written, so it shall be done” and questioning if the future could actually be locked (i.e. fatalism / predeterminism).

This know also, that in the last days perilous times shall come.

And because iniquity shall abound, the love of many shall wax cold.

Right or wrong, it was my mindset when I began to consider the second definition(s) of “realism” above regarding the “doctrine that universals exist outside the mind”. This, in turn, caused me to ruminate upon the concept of free will.

While researching this, I discovered the writings of a dead man; or rather the residual online dynamism of the man and his writings, since I’d not read anything he’d actually written. The dead author’s name was David Foster Wallace and one of his writings, in particular, captured my attention entitled: “Fate, Time, and Language: An Essay on Free Will”.

According to my internet research:  The essay was Wallace’s posthumously published 1985 honors thesis that he submitted to the Amherst College’s Department of Philosophy which, specifically, refuted the philosopher Richard Taylor’s 1962 paper entitled: “Fatalism and the Semantics of Physical Modality”.

I thought of David as a very talented young philosopher with a writing hobby, and did not realize that he was instead one of the most talented fiction writers of his generation who had a philosophy hobby.

Although, as stated prior, I had not read any of Wallace’s writings, it turned out I had heard his words spoken years ago via the audio from a commencement speech he gave in 2005.  I remembered that speech, entitled “This is Water”, and it began as follows:

There are these two young fish swimming along and they happen to meet an older fish swimming the other way, who nods at them and says “Morning, boys. How’s the water?”

And the two young fish swim on for a bit, and then eventually one of them looks over at the other and goes “What the hell is water?”

– Wallace, David Foster, “This is Water”, Commencement Speech to Kenyon College Class of 2005

Later in his speech, Wallace said the point of his fish story was “merely that the most obvious, important realities are often the ones that are hardest to see and talk about”.

In my research, I discovered Wallace was no saint.  Like a lot of us, he had his demons and, sadly, hung himself on September 12, 2008 at the age of 46.  More recently he was paradoxically named, albeit retroactively, in the #MeToo Movement for previously stalking and harassing his ex-obsession and threatening to kill her husband.

No matter how smart we think we are, there are some things we can’t understand.

There are these two guys sitting together in a bar in the remote Alaskan wilderness. One of the guys is religious, the other is an atheist, and the two are arguing about the existence of God with that special intensity that comes after about the fourth beer.

And the atheist says: “Look, it’s not like I don’t have actual reasons for not believing in God.

It’s not like I haven’t ever experimented with the whole God and prayer thing.

Just last month I got caught away from the camp in that terrible blizzard, and I was totally lost and I couldn’t see a thing, and it was fifty below, and so I tried it: I fell to my knees in the snow and cried out “Oh, God, if there is a God, I’m lost in this blizzard, and I’m gonna die if you don’t help me.”

And now, in the bar, the religious guy looks at the atheist all puzzled. “Well then you must believe now,” he says, “After all, here you are, alive.”

The atheist just rolls his eyes. “No, man, all that was was a couple Eskimos happened to come wandering by and showed me the way back to camp.”

Wallace said he used the Eskimo story to discuss what he termed “the whole matter of arrogance”:

The nonreligious guy is so totally certain in his dismissal of the possibility that the passing Eskimos had anything to do with his prayer for help.

True, there are plenty of religious people who seem arrogant and certain of their own interpretations, too. They’re probably even more repulsive than atheists, at least to most of us.

But religious dogmatists’ problem is exactly the same as the story’s unbeliever: blind certainty, a close-mindedness that amounts to an imprisonment so total that the prisoner doesn’t even know he’s locked up.

The point here is that I think this is one part of what teaching me how to think is really supposed to mean. To be just a little less arrogant. To have just a little critical awareness about myself and my certainties.

Because a huge percentage of the stuff that I tend to be automatically certain of is, it turns out, totally wrong and deluded.

Like Wallace, I have my own demons and my thoughts can be overly obsessive constantly; even torturous.  Like a war vet with Post-Traumatic Stress Disorder, those who see much, carry much with them. So much, in fact, it becomes hard not to drown.

It means being conscious and aware enough to choose what you pay attention to and to choose how you construct meaning from experience.

Because if you cannot exercise this kind of choice in adult life, you will be totally hosed. Think of the old cliché quote about the mind being an excellent servant but a terrible master.

This, like many clichés, so lame and unexciting on the surface, actually expresses a great and terrible truth.

It is not the least bit coincidental that adults who commit suicide with firearms almost always shoot themselves in the head.

In the process of taking down some old and dying pine trees on my property a few days ago, it felt like war.  Even wearing the appropriate clothing, gloves, protective eyewear, and while exercising extreme caution, I became scratched and bleeding in ways I did not foresee. As I cursed the sap and knife-like needles and branches, an old familiar darkness entered into me once more that said:  All is meaningless and nothing matters. 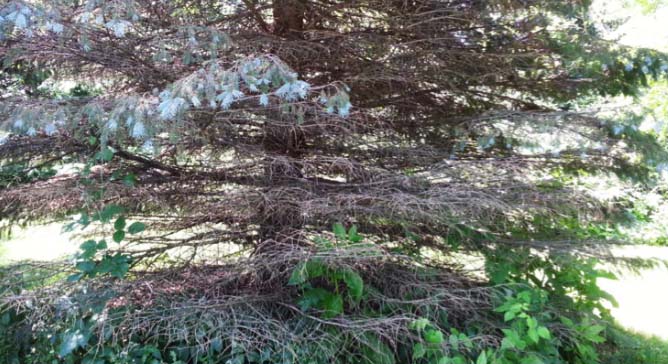 For a moment, I could not shake the knowledge that all would soon be ashes and waste; and, as my mind drifted, I wished civilization’s clock would not run out on my dream of having grandkids in a more peaceful, and hopeful, time.

As I wiped the sweat and blood from my pin-cushioned-by-pine-needle forehead, I looked upward into a magnificent cerulean firmament and let my gaze fall into the distance, where the blue-dome alighted upon the emerald purlieus.  The gentle breeze both cooled and calmed me. I had the moment.  At least I had that.

The capital-T Truth is about life BEFORE death.

It is about the real value of a real education, which has almost nothing to do with knowledge, and everything to do with simple awareness; awareness of what is so real and essential, so hidden in plain sight all around us, all the time, that we have to keep reminding ourselves over and over:

It is unimaginably hard to do this, to stay conscious and alive in the adult world day in and day out.

Which means yet another grand cliché turns out to be true: your education really IS the job of a lifetime.

Truly, I know little more than this moment; even now, as the future crosses the horizon.  It could be fine; but probably not.

That said, I could have never predicted how the digital dynamism of a dead writer, whose words I’d never read, would turn my sense of fatalism into a tribute of his life, works, and words.

It was a real learning experience.  It showed me anything can happen.