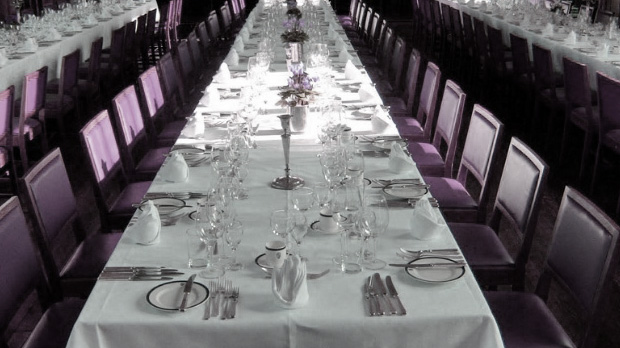 Someone I care about got into some trouble the week before Thanksgiving. They asked for my help, and I wasn’t raised to say “no” in such situations. What ensued were a series of unfortunate events that staggered my mind and challenged my previously naive vision of a moderately benevolent universe.

By any definition, any knowledgeable neutral party would say I did everything right, in spite of the dire turn of events that, fortunately, resulted in only a minor loss of time and money on my part; with a still positive outcome for the party I helped.

Even now, looking back, I realize I’d have made all the same decisions with the same information I had at the time. Yet, the mostly-positive denouement of the entire affair resulted in a conclusion I never dreamed possible at the start.

It had to do with a car accident, an insurance claim, buying a lemon, and ultimately enjoying some fine lemonade in the end. The party who I helped is now better off than if my original plans were realized. I will say, however, it was darkest before the dawn, and things should have ended much worse.

I don’t know why it happened; only that it did. And, in spite of my minor loss of time and funds, I now realize I was changed for the better because of understanding, and appreciating, certain solutions of which I was prejudiced against prior. In short, my mind has been opened in ways which will benefit this blogger far more than some money ever could; and my lessons learned resulted in a new willingness to explore every room before locking any doors.

It’s been said wisdom comes from experience. I believe that now more than ever. It’s also true that time is a teacher that kills all of the students.  Indeed. The inevitableness of reality requires honesty and acceptance.

It’s bigger than me. It washes over like time-drops raining moments on my face.  I can’t grasp anything outside of my reach; or control what’s not mine.

When you’re in the shit, the next-right-move is all that matters. 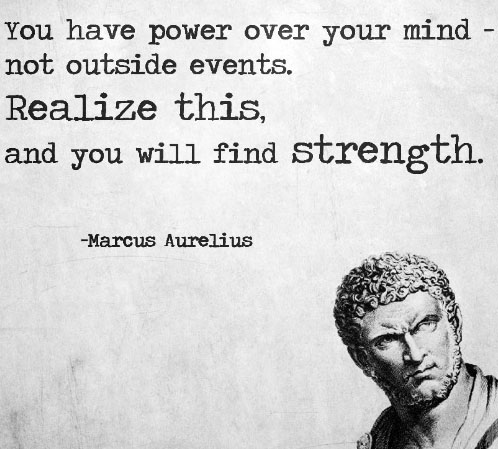 Today, we live in a land where black-robed mullah’s side with misogynic bearded men against the reproductive rights of young girls:

Supreme Court Chief Justice John Roberts issued a rare rebuke over Donald Trump’s attacks on the federal judiciary, saying ‘we do not have Obama judges or Trump judges, Bush judges or Clinton judges’.

….Roberts said on the day before Thanksgiving that an ‘independent judiciary is something we should all be thankful for.’

Consider which U.S. president appointed which judge compared to the deciding opinions of every historical case, and the reader would realize the hilarity, or malice, behind Robert’s contention of an “independent judiciary”.  Yes, it would be funny if wasn’t so sad, and dangerous.

If America were to be made great again, the indictments of Deep State criminals (and particularly those in the Justice Department) would have had to have fallen prior to the 2018 Midterm Elections. They did not.  So, now, it’s become a matter for future historians to sort out.

Maybe Trump wasn’t real. Perhaps he didn’t have the power, maybe he was hoping for a Red Wave that never happened.  In any event, we hear whispers of former FBI Director James Comey, and the Clinton Foundation, being investigated by the now Lame-Duck House, but that’s all. At the same time, judges are reigning in Trump in at every turn; even his own appointees.

Jim Acosta’s White House press pass — stripped from him after a heated exchange between the CNN correspondent and President Trump last week — must be temporarily reinstated, a Trump-appointed federal judge ruled

Of course, the Surveillance State knows where all of the skeletons are buried in every closet, and all they need to do is press the right buttons, at the just right times, to steer the future in whatever direction they want; like reality TV.

The Phony Witch Hunt continues, but Mueller and his gang of Angry Dems are only looking at one side, not the other. Wait until it comes out how horribly & viciously they are treating people, ruining lives for them refusing to lie. Mueller is a conflicted prosecutor gone rogue….

And, furthermore, in complete collusion with a complicit Orwellian Fourth Estate:

….The Fake News Media builds Bob Mueller up as a Saint, when in actuality he is the exact opposite. He is doing TREMENDOUS damage to our Criminal Justice System, where he is only looking at one side and not the other. Heroes will come of this, and it won’t be Mueller…

Hillary Clinton now smiles like an aging Cheshire cat as Julian Assange is trapped like a tiny mouse; prior to the rats taking over the U.S. House.

Harvard Law Professor, Alan Dershowitz, warns Robert Mueller’s report will be “politically very devastating” to Trump; even in the absence of any crimes committed:

How could that happen in America, if not for the propaganda spewed by the Orwellian Media? To be sure, with every morsel savored, and swallowed, by the vapid dullards of a dying nation.

Now, one of the fifty states has even challenged the federal government’s separation of powers by attempting to dictate Trump’s cabinet choices:

The state of Maryland has gone to court against the Trump administration, seeking to remove Matthew Whitaker as acting attorney general and install Deputy Attorney General Rod Rosenstein as the acting head of the Justice Department.

In another era, that would be yuge news. But not so, currently, with the Propagandic Arm of the Surveillance State desiring to win hearts and minds instead of reporting facts.

In the meantime, hypnotized MK Ultra-type loners, high on psychotropic chemicals and under psychiatric care, will continue to break from their prolifically bizarre social media postings in order to shoot little children in gun free zones; as the Orwellian Media paints emotionally manipulative and contrived photo narratives of cartoon-clad illegal invaders using children as pawns in a political scam: 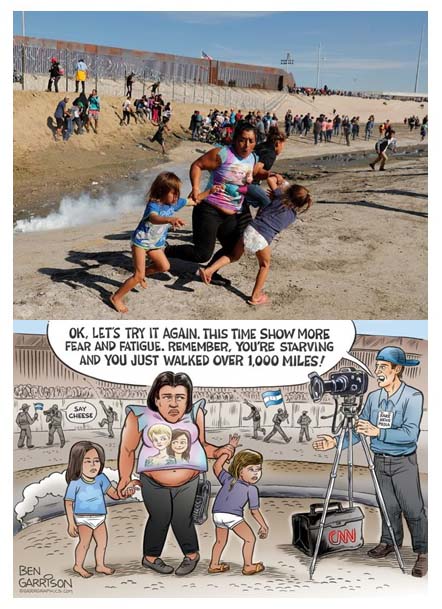 We’re a nation of hollow men, straw men, empty men. A land of therapists, pill dispensaries, coffee houses, fitness facilities, yogurt shops, and hot yoga dens. A people living on imaginary, and regurgitated, green paper vapers for so long, we only know how to recycle anymore. It’s why we build new retail outlets on streets overrun with vacancies and going-out-of-business signage; like a rimfire, and in the center, ashes.

As the plunderers, looters, and slumlords have transitioned American cities into third-world shitholes, the online Titans have created hi-tech online checkpoints.  Papers please.

Just as Amazon has monopolized retail, so, too, has Google cornered the market on information, as monopolistic social media mutants sell censorship trademarked under “fairness” and “protection”.

It’s become difficult, if not impossible, to escape these cannibals, because we’re caught in their world-wide web; an inter net. Certainly, we’ve signed our birthrights away via “accept tabs” and to the sound of mouse-clicks.

….. prepare the way for the Lord; make straight in the desert a highway for our God.

“Though it’s a bit like discovering Zuul in your refrigerator…” 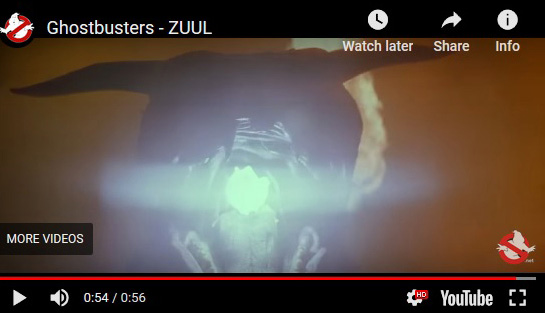 Internet of Things: ZUUL in your Refrigerator

Bible scholars claim prophecy predicted ten economic regions of the world: Ten kings over ten kingdoms who give their power to a beast; and the United Nations has engaged in such plans:

In 1992 the UN formed a Commission on Global Governance charged with devising a system of future global management.  …After several years of “extension consultation” with “world leaders, philosophers, and futurologists” the Commission produced a report entitled “Our Global Neighbourhood.”

….This strategy appears to be based on the Club of Rome’s proposal to divide the earth into 10 administrative regions which they outlined in their report “Mankind at the Turning Point”. … Interestingly the UN is currently in the process of reviewing and reforming the organization, with particular emphasis on the Security Council…

This land is not your land; neither are the waters.  Behold the United States Clean Water Restoration Act of 2010 (Senate Bill # SW.787):

Amends the Federal Water Pollution Control Act (commonly known as the Clean Water Act) to replace the term “navigable waters” that are subject to such Act with the term “waters of the United States,” defined to mean all waters subject to the ebb and flow of the tide, the territorial seas, and all interstate and intrastate waters, including lakes, rivers, streams (including intermittent streams), mudflats, sandflats, wetlands, sloughs, prairie potholes, wet meadows, playa lakes, and natural ponds, all tributaries of any of such waters, and all impoundments of the foregoing.

Is it still conspiracy if it’s all been published by the United Nations and passed into law in the United States?

As stated by this blogger before, President Donald Trump is the manifestation of one of the following three possibilities:

A.) The Real Thing

B.) Serving the agenda of the global financial elite unwittingly

C.) Controlled opposition as a Judas Goat or Trojan Horse

In any scenario above, there remains the possibility that Trump and his Deplorables were merely the bleeding of the brake-lines before the Big Stop.  Or, it could be holy water will soon rain down over the baleful, bastard beast and it’s abominable, bloody feast.

The only plan I can think of is to do the next necessary thing in any given moment and to turn over all that’s bigger than me; and that not belonging to me. To hell with the man, his black horse, and every one by his side.

The table is set and the main course is on the way.

Whether whatever-comes-next is delivered by the hand of God, the devil’s power, or via mathematics by the multiplications and divisions of ordinary men – when it’s time to eat, care not over what is being served but, rather, more importantly, who shows up for dinner.

7 thoughts on “A Veritable Feast of Reality, Choice, and Consequences”