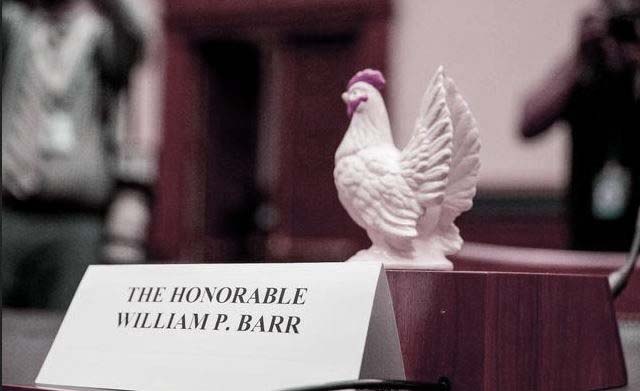 It’s clear the only option the Democrats have now is to discredit Barr.  Communications between Special Counsel Robert Mueller and the attorney general were mysteriously leaked on the eve of Barr’s hearing which, very conveniently, allowed Democratic Senators to administer their same old tactics as was used against Judge Brett Kavanaugh during his Supreme Court hearings.

It has become very clear the Democrats care not for the law, the U.S. Constitution, or justice.  Their motives are completely political.

Accordingly, May 1, 2019 presented as a very bizarre day throughout the American Corporate Media.

Hillary Clinton appeared on MSNBC’s Rachel Maddow whereupon the former presidential candidate looked into the camera and pleaded with Americans to uphold the nation’s system of law by impeaching President Donald Trump. She also said Trump’s persistent tweeting about her crimes made her “sad for the country”.

How could Mr. Barr, a bright and accomplished lawyer, start channeling the president in using words like “no collusion” and F.B.I. “spying”? And downplaying acts of obstruction of justice as products of the president’s being “frustrated and angry,” something he would never say to justify the thousands of crimes prosecuted every day that are the product of frustration and anger?

Oh, the irony.  Especially given the fact Trump was not indicted by Comey’s old boss, Robert Mueller.

Therefore, it is perhaps appropriate for Comey to have poetically opined in his opinion piece about Trump  eating the souls of those around him “in small bites”.

Furthermore, in another New York Times opinion piece, Obama’s former solicitor general who helped draft the special counsel regulations under which Robert Mueller was appointed – first acknowledged how those regulations gave Attorney General Barr the power to close the case against the president and then, in the same paragraph, lamented how the U.S. Constitution allowed “no easy way to remove the attorney general from the process”:

Some commentators have attacked the special counsel regulations as giving the attorney general the power to close a case against the president, as Mr. Barr did with the obstruction of justice investigation into Donald Trump. But the critics’ complaint here is not with the regulations but with the Constitution itself. Article II gives the executive branch control over prosecutions, so there isn’t an easy way to remove the attorney general from the process.

On May 2, 2019, after Attorney General Barr refused to appear before the House Judiciary Committee, Chairman Jerrold Nadler (D-N.Y) called the meeting to order and dramatically stated the following:

We will have no choice but to move quickly to hold the attorney general in contempt if he stalls or fails to negotiate in good faith.

… If he does not provide this committee with the information it demands and the respect it deserves, Mr. Barr’s moment of accountability will come soon enough.

And, finally, the U.S. Speaker of the House, Nancy Pelosi, also blatantly slandered William Barr on May 2, 2019 in her attempts to obstruct the attorney general’s stated investigation into how Robert Mueller’s investigation began in the first place.

As reported by CNBC, the House Speaker said:

He [Barr] lied to Congress. If anybody else did that, it would be considered a crime. Nobody is above the law.

Which, in turn, brought about a quick response from U.S. Department of Justice spokeswoman Kerri Kupec who said Pelosi’s “baseless attack on the Attorney General is reckless, irresponsible and false.”

When asked whether Barr should go to jail, Pelosi added: “there’s a process involved here.”

Indeed. A process to obstruct justice.

7 thoughts on “Democrats are Obstructing Justice by Defaming Barr, Demanding his Resignation, & in Seeking Trump’s Impeachment”