We read to know we’re not alone.

Although that particular truism is often mistakenly attributed to the author C.S. Lewis, it was actually William Nicholson who wrote those words in his 1989 play “Shadowlands”, a story about C.S. Lewis.

Indeed. The power of words. And perhaps many of us out here in the interwebic blogosphere write to know we’re not alone as well.

We use words to comfort and curse, to encourage, to promise, to teach, buy, sell, debate, learn, manipulate, lie, share, seduce, pray, preach, promote, warn, and even survive.

In the aforementioned play, “Shadowlands“, there is another quote that many now reading this may also find relevant to our times:

….pain is God’s megaphone to rouse a deaf world. Why must it be pain? Why can’t he rouse us more gently, with violins or laughter? Because the dream from which we must be wakened, is the dream that all is well.

No, Dear Reader, all is not well.  But it never has been in this corrupt world; or, at least, very well for very long. Everything turns. And whether or not any megaphonic pain originates from God or the devil is beside the point.  The truth remains: life is suffering and it’s been that way from the time of man’s first moans.

To be sure, ever since earth’s original family settled east of Eden it’s been a dog-eat-dog world where only the strong, and smart, survived. Truly, it wasn’t peoplekind’s opposable thumbs alone that placed them at the top of the animal kingdom’s food chain – it was their ability to think. Or, rather, the mind’s ability to choose. To decide. To improve. All of these derived from the silver lining of free will.

And, undeniably, those who have decided best, have lived best.  This is very important to understand, especially now.  Because the times are about to become more extreme than most people currently realize; even to the point to where split-second decisions will determine who lives and who dies.

Since starting my blog over three years ago, I’ve attempted to tell the truth to the best of my ability.  I’ve done so, of course, at my own expense measured primarily by time spent subtracted from zero financial gain – and to the tune of well over 300,000 words so far.

What I’ve gained from my blogging experience, fortunately, has been the ability to remain sane during these crazy times as well as the beneficial, even priceless, perspectives of various online “friends”.

Yes, even in the rough-and-tumble digital world of the free internet: We read to know we’re not alone.

Experience is a brutal teacher, but you learn fast.

Certainly, all of this was on my mind while I read the latest book written by a fellow blogger, and my online friend, Robert Gore of StraightLineLogic.com.  Gore’s most recent book is “Everything I Know About Business I Learned From the Godfather”.  Therein, Gore’s personal life and business experiences are paired to the now iconic fictional characters that were first imagined by Mario Puzo, the author who wrote the original Godfather novel in 1969.  And, undoubtedly, in the opinion of this blogger, Gore’s latest effort has resulted in some very keen insights that are quite relevant to our times.

Now, in the interest of full disclosure, I first met Robert in the commentary of some long-forgotten article more than three years ago. Regardless of the exact date, it was in the months preceding the advent of my own blog. Gore had posted his website and after a few clicks, I could see we were like-minded.  I appreciated his site’s tagline of “never underestimate the power of a question” and I, especially, enjoyed a review he had written there of Mark Twain’s “Adventures of Huckleberry Finn“, if you can believe that.

Since then, Robert and I have had discussions in both the commentaries of articles and emails discussing politics, post-apocalyptical potentialities, books, and authors including the previously mentioned Puzo and Twain as well as other writers such as Cormac McCarthy and Ayn Rand.  In one of my recent emails to Robert, I congratulated him on his latest book and for writing on such a compelling topic.  I also mentioned how my own priorities have shifted away from reading fiction, but that I do enjoy books like (at the time) what I perceived his “Godfather” might be – because, more often than not, I will pick up valuable insights that are beneficial to life, business, and even survival.

As of this writing Robert did not know I had finished his book or that I decided to casually review it in this post. Nor did he ask me to promote the book in any manner whatsoever.

That all said, let me just say this (and in spite of any worldview and/or friendship bias I may have): Gore’s “Godfather”  is very good.

Original at its core, the book is part self-help, part autobiography, part social commentary, and is often even confessional in nature.  It is at once abysmally honest yet imbued with a sort of optimistic nobility at the same time; if only because telling the truth in a world of lies is honorable by any definition.

As with the media, Hollywood, sports, and academia have become bastions of proper-think and proper-speak given over to indoctrination and reform of the reactionary and benighted. Once upon a time, celebrities and professors were almost universally admired. Now a good many of them are best-case ignored, worst-case despised by those of us who don’t play at games or do make-believe for a living.

Chapter three reads as a challenge for honest men and women to face reality, rather than succumb to the emotionalism that has become so fashionable throughout Western civilization today:

Emotional repression was not just something men did because of bad parenting or because all the other men were doing it. They did it because reality demanded it. Hundreds of generations later, reality still demands that those engaged in designing microchips, finding a cure for cancer, or any of the other endeavors that spell human progress put their emotions aside and fully engage their rationality and logic. Displays of emotion meet with reality’s disdain.

For some time now, I’ve debated my liberal friends regarding their faith in government and their antiquated views on big business – of which they mistakenly consider as the exclusive realm of Republican politics. “But Wall Street is not Main Street”, I tell them, “Corporatism is the new Collectivism, Silicon Valley is Big Brother, and Human Resource Departments are Orwell’s new Room 101.  Can’t you see?”

In “Godfather” chapter six, Gore framed it as follows:

At a conference I attended, an executive claimed her poultry processing company befriended its chickens. Lighting, heating and all other living conditions were continuously adjusted to keep the birds happy, she gushed. Happier poultry may be better tasting poultry, but in the end they still kill the chickens. When business tells you it’s your friend, that it cares for you and your happiness, keep those chickens in mind.

There are countless ways to tell America’s story because there are so many narrative arcs by which history can be told.

When I first read Mario Puzo’s Godfather as a young man, I found it to be an eloquently written multi-generational saga providing fascinating insights into the underworld, family relations, and violent behind-the-scenes power struggles in New York City, Las Vegas, and Hollywood. 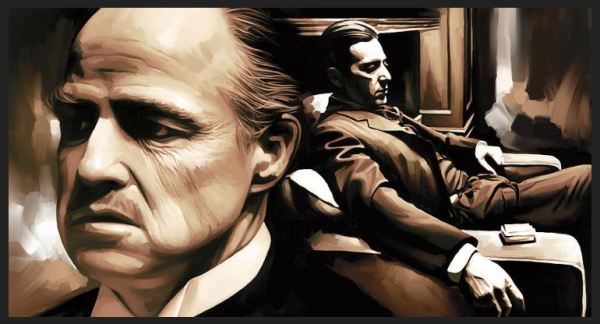 The first two Godfather films, directed by Francis Ford Coppola, and released in 1972 and 1974, respectively, are still widely considered as two of the best movies ever made.  Their overall production, cinematography, scripting, cast, and dynamic on-screen portrayals performed by the some of the best actors in the history of Hollywood, near-perfectly translated Mario Puzo’s words onto the big screen.

Paradoxically, in his book, Gore also accurately illustrates how the original Godfather novel and movies so precisely depicted the seedy underbelly of Tinseltown – the soulless vacuity of its stars and starlets, its epic immorality, and the endless supply of enormously elephantine egos. Still, even today, Hollywood presumes to condescendingly preach its particular brand of voodoo to average Americans of whom it considers as mere plebeians.

Accordingly, in chapter seven of “Godfather”, Gore isn’t tolerating any of that:

The glitterati adopt another moral balm: collectivist politics. Stealing and spending other people’s money for your causes and beneficiaries is more virtuous than spending your own. Anyone who resists such theft is immoral. These are simple formulations, the only kind most stars can understand. Within their own crowd they confer admiration without accomplishment. Everyone else gets cloying righteousness, self-satisfied superiority, and sneering contempt as the great unwashed.

Later Gore identifies the “organized crime syndicate with the most muscle” and casually compares the bountiful bread baskets that were once the nations of Sicily and America centuries ago, but were, over time, ravaged by greedy men spouting “euphemisms and other linguistic sleight-of-hand“:

Crime is a lot easier when the victims don’t realize they’re victims. The government and the Mafia are parasites, living off the work of those who honestly produce. Linguistic contortions are designed to obscure that fact from parasites and victims alike. Like other parasites, organized crime and governments weaken and often kill the hosts.

In spite of its realism, and the naked honesty of its final chapters, “Everything I Know About Business I Learned From the Godfather” is not a doom and gloom book. Nor does it glorify the Machiavellian machinations of the underworld. On the contrary, it is an offering whereby the author’s intelligence, and humanity, shine through so as to illuminate better pathways for living.

In fact, if Gore’s “Godfather” was assigned as required reading for educational business courses then, perhaps, those graduating would possess more profitable practical perspectives from which to benefit their own lives – and, in turn, society at large.

It’s an offer we can’t refuse.

3 thoughts on “An Offer You Can’t Refuse”