According to the Encyclopedia Britannica, “Auld Lang Syne” literally translates to “Old Long Since” which could also be interpreted as “since long ago” or “for old times’ sake”.  Certainly, there is a feeling of melancholy when the song is sung at the end of another year gone by.  Maybe any sadness could be attributed to good times that are now gone or, perhaps, especially, regret at what might have been.

The same goes for inevitable outcomes of unavoidable events, predictable denouements of tragic stories, and the ineluctable death of nations. It calls to mind a quote from the 1994 movie “The Legends of the Fall” when the Native American narrator described how a beautiful young woman caused brothers to hate one another and a family to fragment.  He said:

She was like the water that freezes inside a rock and breaks it apart. It was no more her fault than it is the fault of the water when the rock shatters.

Indeed. Natural forces rage over and upon the earth.  And who is Man to stop the rain?

A recent article addressing our “hysteric times” identified America as a corpse consumed by maggots, with liberals acting as the maggots and conservatives as “rooting for the corpse”.  What an astute analogy.  Because the Collective acts to completely consume rotting systems as those wearing MAGA hats perform CPR on a skeleton.

There are those who will say America’s fate was sealed when her government assimilated education, or when the Bible was banned in schools.  Others will blame the creation of the Federal Reserve in 1913, or FDR’s New Deal, or the assassination of JFK, or the advent of The Great Society under Lyndon Johnson.

History buffs might claim the nation began its first convulsions when Abe Lincoln overturned states’ rights in the Civil War era or even earlier than that – when the Federalists overrode the Anti-Federalists in 1788.

Or maybe it was due to the covert implementation of the 45 Communist Goals, or the development of the League of Nations and United Nations.

In truth, it could’ve been any, and all, of the above or maybe these were just the symptoms of something deeper and more profound. In any case, they were all cracks and water in the nation’s foundation.  And as was expected, winter is finally here.

Exactly how and when America’s foundational stones will shatter in the coming months is anyone’s guess, but do know this:  When Progressive Democrats, and an activist mainstream media, stage a third-world impeachment trial of a U.S. President while reverently citing the words of the nation’s long-dead founders who were, by their own definition, privileged white males and racist slave owners – the end is nigh.

So it was no surprise when several days ago, in a buffet line, this blogger overheard an overweight man tell an obese woman the following:

“Poor Trumpy. He got hisself impeached.”

To which the woman replied with a Cheshire-cat grin of satisfaction:  “Yep!  History will always show that he was impeached“. 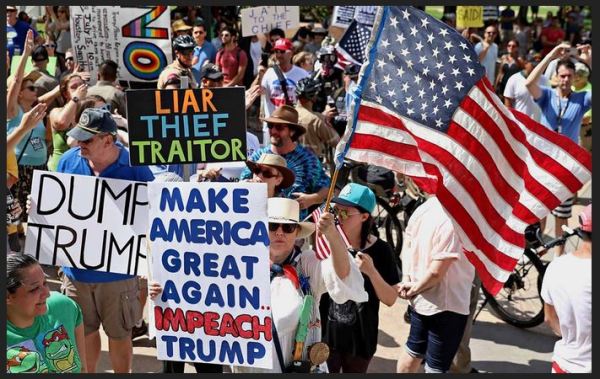 One wonders if these citizens were aware of President Trump’s December 17, 2019 letter to House Speaker Nancy Pelosi. It was sent the day before the impeachment vote and it said, in part, the following:

I write to express my strongest and most powerful protest against the partisan impeachment crusade being pursued by the Democrats in the House of Representatives. This impeachment represents an unprecedented and unconstitutional abuse of power by Democrat Lawmakers, unequaled in nearly two and a half centuries of American legislative history.

The Articles of Impeachment introduced by the House Judiciary Committee are not recognizable under any standard of Constitutional theory, interpretation, or jurisprudence. They include no crimes, no misdemeanors, and no offenses whatsoever. You have cheapened the importance of the very ugly word, impeachment!

By proceeding with your invalid impeachment, you are violating your oaths of office, you are breaking your allegiance to the Constitution, and you are declaring open war on American Democracy…

…. Any member of Congress who votes in support of impeachment – against every shred of truth, fact, evidence, and legal principle – is showing how deeply they revile the voters and how truly they detest America’s Constitutional order. Our Founders feared the tribalization of partisan politics, and you are bringing their worst fears to life.

Worse still, I have been deprived of basic Constitutional Due Process from the beginning of this impeachment scam right up until the present. I have been denied the most fundamental rights afforded by the Constitution, including the right to present evidence, to have my own counsel present, to confront accusers, and to call and cross-examine witnesses ….

Do the people care?  Evidently not.  And, unsurprisingly, House Speaker Pelosi called the 6-page letter “ridiculous” and “really sick” as some polls now show 54% of American’s supporting Trump’s forced removal from office.

It means there is no coming back from this one.  The damage is done.

It means, by any definition, perilous times are here; and that predictably programmed dialectics will prevent either side from accepting the results of the 2020 Presidential Election.  Surely, the ANTIFA crowd will be rioting in the streets in the event of a Trump win. And, if Trump loses and contests the results over wrongful impeachment, illegal immigration, vote fraud, or any other reason – the rioting of the collectivists will be even worse.

It also means that if Trump loses, a large percentage of the U.S. population will not accept the tyranny of the Political Left; because if the Progs are now willing to engage in such nefarious deeds as recently demonstrated on Capitol Hill with the impeachment sham, and in states like Virginia regarding gun control, imagine what happens when they win the power to legislate socialist hell from sea to shining sea.

Understandably, therefore, many natives have become increasingly angry and restless; and this may also be due to the fact that Epstein didn’t kill himself.

For example, at a recent election rally for Joe Biden, a random nobody in the audience called out the former vice president of the United States regarding his corrupt involvement in Ukraine.  The heckler, additionally, yelled to Biden as one of the leading presidential candidates in the Democratic primaries:

“YOUR SON IS A CRACKHEAD, JOE! WHADDEYA THINK ABOUT THAT?”

Yet, in spite of the heckler’s accurate statements, the Biden supporters in the audience began chanting: “WE WANT JOE! WE WANT JOE!”

Apparently, so, too, do American institutions today.  It’s why the FISA court has refused to hold anyone accountable at the FBI in the aftermath of Inspector General Michael Horowitz’s stunning report on FISA abuse during the 2016 Presidential Election;  why a TV news network, in an Orwellian manner, identified Trump as the leader of a “destructive cult”, using “mind control” on Americans”; and why the U.S. Senate may deny the president his right to confront his accusers.

Certainly, U.S. Attorney John Durham may plumb the depths of the Russiagate rabbit hole but his report is not due to be delivered until late spring or early summer 2020.  Even then, one wonders if Americans will have the stomach to digest it fully; that is, of course, if the corporate media spinners choose to spoon-feed any of Durham’s findings to the imprudent plebes.

Ask yourself these questions, Dear Reader: Do American’s have the political will to actually drain the swamp?  What happens when the economy tanks in 2020? Do you think they’ll desire to root out any corruption then?

Or stated another way: Do the current measurable demographics in America today identify a sufficient percentage of the body politic as having the necessary moral outrage, and the courage, to sustain real swamp draining?  And will the current demographics significantly change in the New Year as fiat green confetti rains down over Wall Street and onto Main Street?

Regardless, it has become clear that those at the top of the pyramid, as well as their minions comprising the Political Left, care not to consider the historical view of their actions. It could be because they are now desperate as cornered animals. Or maybe it’s because they believe they’ll soon be the victors who will rewrite history.  And perhaps from their perspective, these are not mutually exclusive.

Even so, take heart.  America’s fate may have long been sealed, but the ideas that originally made the country great will never die.  Many will rise to meet the collective tide and even if victory is not assured under Trump’s presidency – his election will prove to have been a crucial catalyst toward that end.

Until that time, trust nothing reported by the Orwellian Media, remain ever skeptical, and never overestimate the American Sheeple.  One day, in their wake, new mini-republics might rise and become known en masse as Nobullshitopia.  Because then, and only then, can we stand united.

In the meantime, cheers to the New Year as we raise our glasses to the like-minded near and far. The past is a bright dream, and hope is the future’s fixed star.

5 thoughts on “America is Over But You Knew That Already”