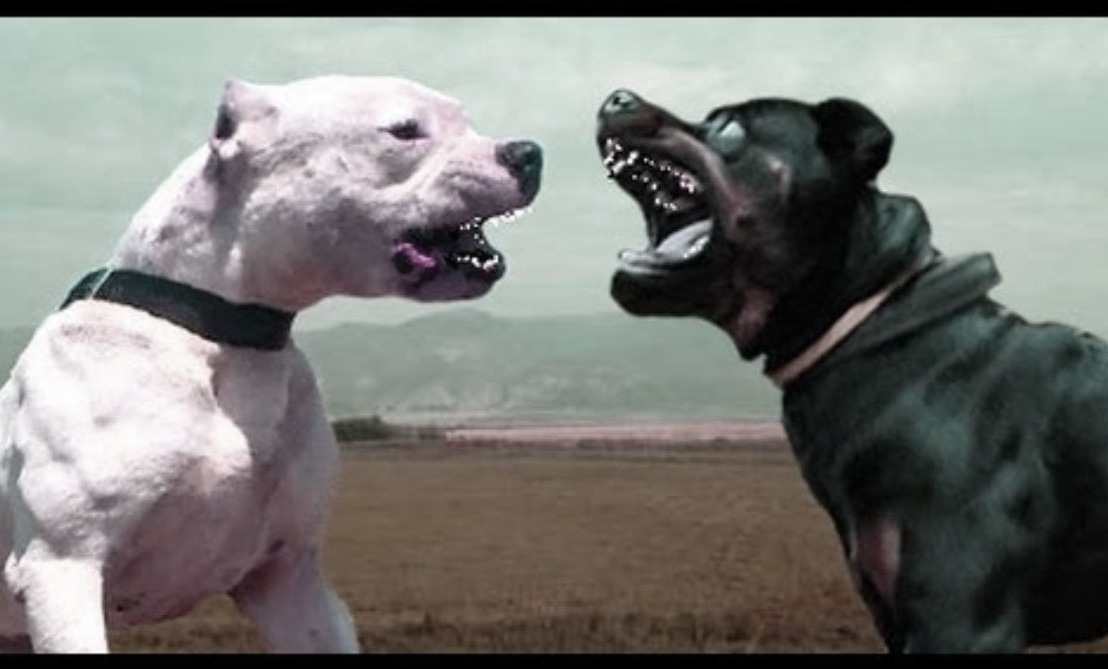 And Caesar’s spirit, ranging for revenge,

With Ate by his side come hot from hell,

Shall in these confines with a monarch’s voice

Cry ‘Havoc,’ and let slip the dogs of war;

Last week, on April Fool’s Day, I read how the month of March 2017 was a “turning point” for Hillary Clinton as she, once again, challenged Donald Trump on Twitter and made three public speeches where she encouraged her former foot soldiers to: “Resist, persist, insist, enlist”. Upon reading those words, I was reminded of the little girl in the movie “Poltergeist” who said: “They’re baaack”.

Yes, they’re back like “Ate”, the Greek goddess of discord and vengeance. Well, actually, in truth, they never really left.

In William Shakespeare’s “Julius Caesar”, the main character isn’t Caesar. On the contrary, the story is mostly about everyone else. If prose could be equated to cuisine, then “Julius Caesar”, although the Bard’s shortest play, was, nevertheless, a veritable feast; an exotic, psychological buffet of torn loyalties, political treachery, honor, patriotism, friendship, intrigue, tragedy, and revenge.

Caesar, who believed himself to be as immutable as the North Star, soon lay mortally sliced and diced by those whom he trusted, thus setting off a chain reaction whereby the destiny of Rome and the fate of the killers were, seemingly, preordained by the vengeance of an unseen ghost recalled from the grave.

For now, I am unsure if Trump is Caesar, and the Deep State is the conniving Cassius wary of Trump’s presidential power and love of the people; or if the Deep State is Caesar and Trump is the tragically doomed Brutus whose primary motivation was love of country and who paid the ultimate price for his naiveté; or, if the U.S. Constitution is emblematic of Caesar and Trump is Mark Antony exacting revenge upon its murderers.

In any scenario above, perils abound around every corner and, as Caesar said to the soothsayer (act three, scene one): “The ides of March are come.”

“In the spring, at the time when kings go off to war…”

Towards the end of March 2017, reports were circulated throughout the interwebic blogosphere regarding Russia and China taking measures to bypass the U.S. Petrodollar in order to “facilitate more transactions in gold between the two countries”.

When considering global geopolitics, a good paradigm to follow is: “Nothing is as it seems”.   Another good construct would be: “Follow the money trail”.

In other words, whenever conflicts arise, you will usually find one of the following at the bottom of the rabbit hole: Land, gold, energy, or some combination of these three.

And, in the past, whenever we see the BRIC nations disrespecting the Petrodollar, it is usually a just a matter of time before conflicts erupt in various hotspots, like Ukraine or Syria, complements of the Global Powers That Be.

In November of 2013 when, Ukraine’s President Viktor Yanukovych abandoned an agreement on closer trade ties with the European Union and, instead, sought closer co-operation with Russia, it began a series of events which then transitioned into the natural gas wars of 2014, and the Ukrainian coup in February, 2014 during the winter Olympics of that year.

This all, in turn, caused Russia to make the decision to annex Crimea in March 2014. Then, Russia signed a $400 billion “Holy Grail” gas deal with China in May and this gave the Petrodollar a nice kick in the nuts.

In June of that year, Ukraine, at the behest of the Western globalists, refused to pay its gas bill to Moscow’s Gazprom, so Russia cut off their gas. Soon after that MH17 was shot out of the sky and Joe Biden’s son’s company began preparing to drill for shale gas in eastern Ukraine.

A year before all that, however, on March 19, 2013, President Bashar al-Assad of Syria was accused of crossing Obama’s red line in Syria with a chemical weapon attack that was later attributed to “opposition forces” there; where some claimed the United States was engaged in a “pipeline war” that “could destabilize” Russian president, Vladimir Putin.

The Russian central bank opened its first overseas office in Beijing on March 14, marking a step forward in forging a Beijing-Moscow alliance to bypass the US dollar in the global monetary system, and to phase-in a gold-backed standard of trade.

Then, for whatever reason, on March 20, 2017, an article written by the director of the Atlantic Council’s Rafik Hariri Center for the Middle East, Frederic C. Hof, questioned if Bashar al-Assad of Syria was still “relevant”. Hof wrote:

As Iran’s client, he [Assad] is the main obstacle to Syria’s resurrection. Moscow knows this to be the case. Will it act? Can it act? These are questions to which patriotic, nationalistic Syrians urgently seek answers. That they do so is the inevitable result of America’s self-imposed absence.

Next thing you know we have the American Ambassador to the United Nations, Nikki Haley, holding up a picture of a young victim who was wounded in a Tuesday, April 4, 2017, chemical attack in northern Syria which killed 72 people.

Speaking at an emergency Security Council meeting, Haley referred to: 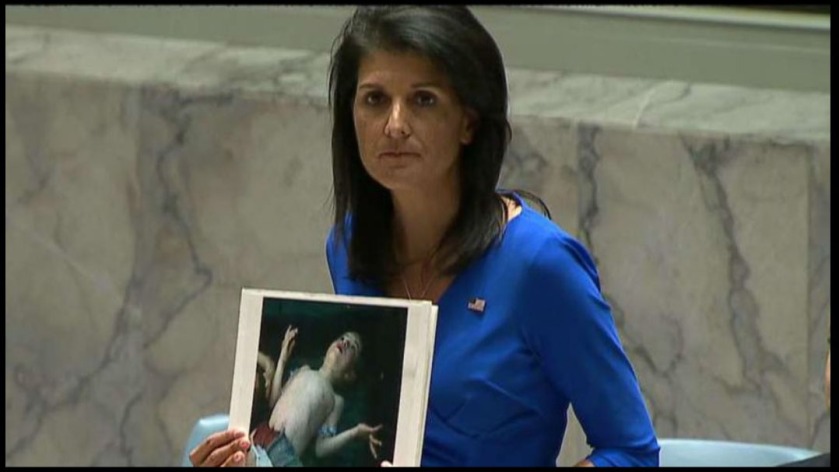 During the emergency session, Haley also:

ripped Russia for getting in the way of the United Nations holding Assad accountable after a prior attack in 2013 and accused Russia of defying “the conscience of the world.”

“Russia stood in the way of this accountability, they made an unconscionable choice,” she said, before calling on Russia, which opposed the resolution, to use its influence to effect peace in the region.

“How many more children have to die before Russia cares?” she asked.

Also on Tuesday, the same day as the chemical attack in Syria, Newsweek re-published a March 31, 2017 article that was also written by the aforementioned Frederic C. Hof, of the Atlantic Council, which questioned if President Trump and Secretary of State Rex Tillerson are “Letting Syria’s Assad Off the Hook?”. In that article, Hof referenced an apparent confluence of statements made by Tillerson and Nikki Haley:

In Ankara on March 30, Tillerson commented that Assad’s long-term status “will be decided by the Syrian people.” On the same day, in New York, Haley stated “our priority is no longer to sit there and focus on getting Assad out.

United States Secretary of State, Rex Tillerson, and America’s Ambassador to the United Nations, Nikki Haley, both addressed what seemed to be a more amicable foreign policy posture towards Assad five days before the Syrian president allegedly chemically attacks little Syrian children for which the Trump administration then:

blamed the Syrian government for the attack, one of the deadliest in years, and said Syria’s patrons, Russia and Iran, bore “great moral responsibility” for the deaths.

On top of all this, many sources are reporting on Tillerson’s Tuesday, April 4, 2017, twenty-three-word “odd and confusing statement” on North Korea:

North Korea launched yet another intermediate range ballistic missile. The United States has spoken enough about North Korea. We have no further comment.

And, a senior white House official told reporters on Tuesday night that “The clock has now run out, and all options are on the table,” for North Korea, while Trump says “he will go it alone” regarding:

both North Korea’s ongoing efforts to develop nuclear and ballistic weapons programs and China’s willingness to constrain those efforts.

At the same time, and perhaps, just in time, it has been reported that, as of April 5, 2017, Trump Advisor Stephen Bannon has been removed from the National Security Council.

Meanwhile, back here at home, Trump’s domestic policy is being declared dead on arrival:

Rep. Patrick McHenry, a member of House Republican leadership, said on Wednesday afternoon that conservatives’ proposals to reach a compromise on healthcare are a “bridge too far”

House Speaker, Paul Ryan, also on Wednesday afternoon, said that tax reform will take longer to accomplish than repealing and replacing Obamacare would, saying Congress and the White House were initially closer to agreement on healthcare legislation than on tax policy.

But that’s not all.

Also this week, we discovered that former President Obama’s administration and the mainstream media have colluded to hack the Trump transition.

On April 3, 2017, in response to an initial report by the journalist and author, Mike Cernovich, both Bloomberg and Fox News confirmed the identity of Obama’s former National Security Advisor, Susan Rice, as the culprit who feloniously “unmasked” the identity of those within President Donald Trump’s Administration for the purposes of political expediency, while under the guise of foreign surveillance.

Yet, in spite of the Rice revelations this week, the phony Russian election hacking won’t seem to die.

It doesn’t matter that former U.S. Director of National Intelligence, James Clapper, has said there is NO EVIDENCE of Trump’s alleged collusion with Russia; that the ranking Democrat on the House Intelligence Committee, Adam Schiff, has admitted there is NO PROOF; that the Democrats on the Senate Foreign Relations Committee have seen NO EVIDENCE; and that former CIA Director, and Clinton Ally, Michael Morell, says ALL SMOKE NO FIRE regarding Trump and the Russians.

Nope. The hits just keep on a coming.

On Tuesday, April 4, 2017, Tucker Carlson from Fox News Network debated David Goodfriend, a former deputy staff secretary in the Clinton administration regarding the importance of the recent “unmasking” revelations involving Rice. During that interview, Goodfriend said he was:

bothered by our country being compromised by a number one foreign adversary in collusion with our president.

because, yesterday, or rather April 2nd, right when the Washington Post was going to come out with its story about the meeting between Trump people and Russians, THAT was when we decide to hear all about Susan Rice and the character assignations started

Yet it was April 2nd, that the journalist and author, Mike Cernavich, posted his article on Medium.com outing Susan Rice which exposed another timeline problem. In his April 2nd article identifying Susan Rice, Cernavich claimed the New York Times had been sitting on the story for “48 hours”.

The misdirected anger expressed by Goodfriend (note the ironic surname) over bogus claims regarding Russia, seems to have manifested as a sort of symptomatic epilepsy resulting from brain damage. These people will never give up. Therefore, they must be defeated.

When it comes to political intrigue involving Susan Rice, I realize that, just as Trump’s political adversaries won’t stop until he is impeached, or fighting their wars, or voted from office in 2020; Trump and his deplorables must respond in kind with equal measures of resistance.

But is this happening?

On Thursday, April 6, 2017, it was announced that House Intelligence Committee Chairman Devin Nunes (R-Calif.) would “temporarily step aside” (for no valid reason) from the investigation of Russian meddling in the 2016 election, “including interactions between Moscow and the Trump campaign”.

In a statement, Nunes said:

Several left-wing activist groups have filed accusations against me with the Office of Congressional Ethics. The charges are entirely false and politically motivated, and are being leveled just as the American people are beginning to learn the truth about the improper unmasking of the identities of U.S. citizens and other abuses of power.

So, how should Trump and his supporters fight back in this dogfight?

Perhaps they should look to one of the toughest breeds of canine, the Dogo Argentino, also known as the Argentine Mastiff. The Dogo Argentino has extremely strong jaws, and, in a fight, it goes straight for the throat and doesn’t let go. In doing so, it achieves victory over its opponents yet, at the same time, it remains very good-natured and will only fight in defense.

Trump must do the same. He is surrounded by the Dogs of War. It is a fight unto the death so there will be no second place participation trophies.

Feel the boots upon the ground

Trouble brewin’ all around

6 thoughts on “Dogs of War: Fight to the Death”