Growing up in a small Midwestern town in the fading light of Norman Rockwell’s America, I came of age during the saccharine seventies amid the cannabis-crammed rock and roll arenas that were, seemingly, counter-weighted by endless replays of ABBA and The Bee Gees within the Frequency Modulated atmosphere of that era.  During the eighties, I became an optimistic young Republican under the stewardship of Ronald Wilson Reagan; a moderately successful businessman in the nineties; and, later, a concerned patriot of the new millennium.

Immediately following the subprime mortgage crash of 2008, the election of Barack Obama and, especially, after the Benghazi attacks on 9/11/2012, I became increasingly aware of the tectonic shift beneath the American landscape and soon realized that Norman Rockwell, like Elvis, had left the proverbial “building”, never to return.  The best way I can describe it is that the real power structures behind the United States, Inc., as well as the globalist, collectivist, political left , finally took their “their gloves off”, so to speak.  Indeed, their “masks” were removed and nothing was hidden anymore.

For the last several years I have contemplated and tried to pinpoint exactly when America’s once great and promising song of liberty went off key. Was it when the Federalists overcame the Anti-Federalists in 1788?  When Lincoln overturned states’ rights during the Civil War era? Was it the establishment of the Creature from Jekyll Island, the Federal Reserve, in 1913? The development of the League of Nations followed by the United Nations?  When Elvis first swiveled his hips on The Ed Sullivan Shew? The assassination of John F. Kennedy and the ensuing turbulent sixties? The advent of The Great Society under Lyndon Baines Johnson?

Dr. Benjamin Spock and his misguided propagandizing of child-centered parenting?  Woodstock? The broadcasting of television programming like Bewitched and I Dream of Jeannie where women were portrayed with magic powers designed to play men like fiddles? Betty Friedan, Gloria Steinem, the feminization of the American male? Malcom X, Martin Luther King, Affirmative Action?

Pick any of the above and remember that opinions are like noses and glutei maximi; everyone has them and they all smell to some degree.  In fact, this could be the core reason as to why the band is breaking apart: Too many opinions.  Clearly, if there are performing elements competing with each other in any musical composition, and if they are playing separate and unrelated notes, the result is a dissonant cacophony of amalgamated noise.

Undoubtedly, there are multiple explanations why the United States has fallen into disharmony; but if anyone cares to listen through all of the discord, they will find the root problem is two separate bands marching to competing drummers.   On the right we have the Individualists and on the left there are the Collectivists.  One band sings soaring and inspirational songs of freedom, national pride, autonomy, reason, equality of opportunity, and self-reliance.  The other group plays a mix of folk and rap music over the irreconcilable bass and drum beats of self-indulgence, mutual dependence, rebellion, sacrifice, lawlessness, pleasure, pain, justice, diversity, poverty, equality of outcomes, globalism, and world harmony.

Of course many problems in modern America are furthermore exacerbated by defective instruments; including fractional-reserve banks playing promissory notes, like decrescendos of musical confetti, falling from defective Federal Reserve trumpets blowing hot-air from on high.  Still, the primary and most transparent means by which the modern bandmasters and conductors strive to control the music-makers is through heavy taxation, expansive regulations, out of control entitlements, and pervasive political correctness; all familiar lyrics directly transcribed from the blood-stained pages of Karl Marx’s hymnal.

Why don’t political leftists and Fabian Socialists ever look to history to contemplate the proven outcomes of their beliefs?  Vladimir Lenin, Joseph Stalin, Hitler’s National Socialist German Workers’ Party, Venezuela; or Detroit, Chicago, and every other liberal-governed urban shithole staining America’s once blossoming fruited plains.  It’s not hard to connect the bridges, except for the Collective Left.  Why can’t the snowflakes of today understand what happened after Hitler implemented gun control and perfected socialized medicine?  Why don’t they see the similarities between The Fuhrer’s Brown Shirts and the ANTIFA crowd of today?

What is so hard about logic and history for the Collectivists to understand?  Is it because they can’t see; or because they won’t look?

Regardless, and most assuredly, the disharmony began during the times of the first songs.  Somewhere, tens of thousands of years ago, it started with those living in caves.  GROK invented the wheel and, thus, made lighter the burdens of Mankind.  As goods became more easily exchanged, villages increasingly engaged in trade, and the regional economies thrived.  But then THUG organized a gaggle of goons sporting primitive weapons; they formed a committee, and began to tax, regulate, and control all they could.  Later, in THUG’s greed, and as his armies progressively realized the benefits of their grift; they came to feel entitled, and their lust for power, and indolence, grew insatiable right up to the first revolution.

But what of the future? Has anyone ever conceived, let alone established, a perfect collectivist society? How about a government, or nation-state, comprised of those one-hundred-percent fully dedicated to Collectivism in its pure ideological form?  Actually, there is a world so envisioned.

When the author Ayn Rand (1905 – 1982) was in her early thirties, she wrote a novella about a future collectivist dystopia entitled “Anthem”, which was published in 1938 in Great Britain.  She wrote the book in 1937, or five years after Aldous Huxley’s “Brave New World” and eight years before George Orwell’s “Animal Farm”.  Rand was born in St. Petersburg, Russia and, at the age of twelve, she witnessed her father’s successful business seized by Bolshevik soldiers under Vladimir Lenin in 1917.  Obviously, Rand’s early first-hand experiences with Collectivism inspired Anthem as well as her later writings; which proclaimed the merits of Individualism and promoted her philosophy of Objectivism.

Anthem takes place in a post-apocalyptical setting many years after “The Unmentionable Times” and depicts a civilization where the word “I ” has been replaced by “we ”, the candle is embraced as high technology, and society is governed by a World Council of Scholars.  The story’s protagonist is known as Equality 7-2521 who first strives to realize his individual identity, and then later rediscovers knowledge that was lost to Mankind.  Equality 7-2521 eventually renames himself Prometheus, in reference to the “deliverer of light” from Greek mythology.  However, before Equality 7-2521 could completely defy the conventions of the collectivist ideology as enforced by the World Council, he first had to discover freedom:

There is nothing to take a man’s freedom away from him, save other men. To be free, a man must be free of his brothers. That is freedom. That and nothing else.

Certainly, Ayn Rand venerated America’s liberty and revered the Individual against the Collective.  Her indisputable devotion to America’s freedom would also explain why she later revised Anthem and published it in the United States in 1946. For the American edition, Rand replaced some of the poetic and flowery language in favor of a simpler, clearer presentation; and in the author’s forward for the U.S. Edition, Rand said she altered the book’s “face”, but not it’s “spine” or “spirit” and “confined the editing to its style”.

Paradoxically, I own an ancient Anthem paperback complete with Rand’s forward, dated April 1946, and showing a price of 60 cents on the cover.  It also contains ads for the other Signet paperback editions of Rand’s Fountainhead and Atlas Shrugged for 95 cents, and $1.25, respectively.

Of course, in 1946, a year that coincidently corresponds to the beginning of Strauss and Howe’s last American First Turning, Rand clearly wanted Americans to digest what she considered the antidote to the burgeoning “social” aims and objectives of the multifarious councils and organizations of that day.  These entities, from the perspective of Rand, were already wielding the tyrannical conceptual power of the word “We”:

What is my joy if all hands, even the unclean, can reach into it? What is my wisdom, if even the fools can dictate to me? What is my freedom, if all creatures, even the botched and impotent, are my masters? What is my life, if I am but to bow, to agree and to obey?

But I am done with this creed of corruption.

Similar to the writings of Huxley, and later Orwell, Rand also warned mankind regarding what she considered as the inevitable dystopian denouement, from conception to crescendo to coda, of when a society sings the praises of collectivism and community ideals.  Instead, Rand envisioned a world where men live by their own right, having the freedom to choose their associations by merit, as opposed to surrendering to the insatiable demands of “We”, the Collective:

I am neither foe nor friend to my brothers, but such as each of them shall deserve of me. And to earn my love, my brothers must do more than to have been born. I do not grant my love without reason, nor to any chance passer-by who may wish to claim it. I honor men with my love. But honor is a thing to be earned….

For the word “WE” must never be spoken, save by one’s choice and as a second thought. This word must never be placed first within man’s soul, else it becomes a monster, the root of all evils on earth, the root of man’s torture by men, and of the unspeakable lie.

And what is the unspeakable lie?  It could be what the Entitled believe in their hearts; that they have the right to lay claim to the life-songs of others.  Who gave them the right?  “We”, that’s who.  Well, like Rand, and the signers of the United States Constitution, I reject that premise. But, what does this mean? 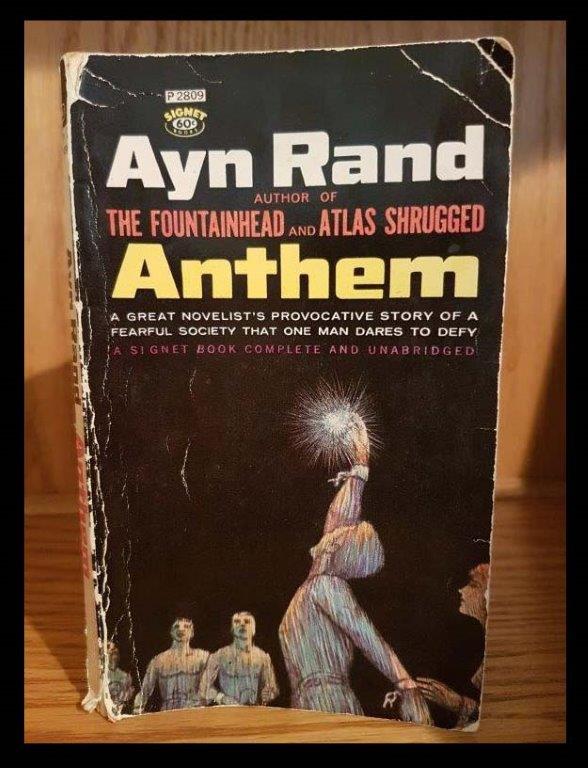 It means:  “Yes, Obama, I did build that”.  It means living free according the laws of my land that were signed by the blood, and sacred honor, of my forefathers.  It means just because I buy a computer, or a smart phone, or purchase internet service with the money I have earned, it does NOT give anyone the right to spy on me.

All those today who believe they are entitled are, actually, not.  From the times of the first songs there have been those who sought to control the music.  They can only do so when it is their notes being played; until the music stops.

But then he gave up all he had won, and fell lower than his savage beginning.

What brought it to pass? What disaster took their reason away from men? What whip lashed them to their knees in shame and submission? The worship of the word “We.”

In the ensuing dissonance of revolutions and war, we will hear loud symbol crashes, and drum rolls, and screeching trumpets.  The lyrics and harmonies will be forgotten until someone remembers how to make music again. It will begin by first searching for what was forgotten.

The out-of-tune opposing players desire to set the premises and establish the rules of play.  We should reject them entirely.  Why?  Because fuck them.  That’s why.

In the outgrowth of the forthcoming devastation, we must recall the qualities that are revealed in the paintings of Norman Rockwell, and as established in the U. S. Constitution.  If we don’t, the old songs won’t be worth remembering anyway.

3 thoughts on “A Battle Hymn: The Anthem Against the Inappropriately Entitled”