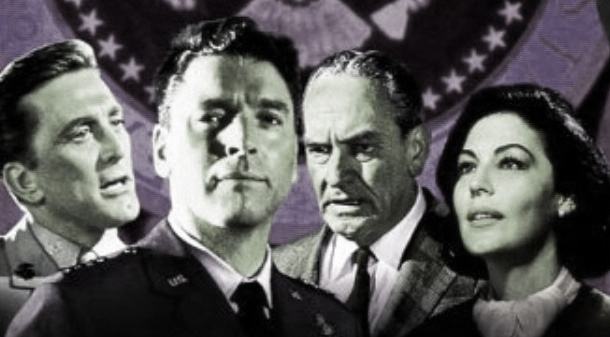 As the political coup against President Donald Trump continues, I was recently reminded of a 1964 film entitled Seven Days in May starring Burt Lancaster, Kirk Douglas, Fredric March, and Ava Gardner.  Paradoxically, the screenplay was written by Rod Serling, the same guy who created and narrated The Twilight Zone.

Coincidence?  But I digress.

Serling’s screenplay was, in fact, based upon the novel of the same name that was written by the authors Fletcher Knebel and Charles W. Bailey II.  Published during the first year of John F. Kennedy’s presidency, the book was actually read by JFK who not only shared it with those in his circle, but also encouraged the production of the film.  Unfortunately, however, President Kennedy never lived to see the movie play on the big screen.

The story of Seven Days In May describes a coup d’etat against a sitting president who desired peace with the Russians. Those behind the conspiracy believed the Russians could not be trusted and therefore took matters into their own hands by way of a scheme dubbed ECOMCON (Emergency Communications Control).  The strategy was to assume command over America’s telephone, communications, radio, and television networks in an attempt to forestall the president’s plan from being implemented by Congress.

The plot seems eerily familiar, no?

The narrator of the film’s classic movie trailer frames it thusly:

There are some who will say:  ‘It can never happen here’.  But this is the story of how it could happen in seven days of intrigue, of blackmail, of terror; an eternity of suspense.  This is the astounding story of a military plot to overthrow the government of the United States; which, if successful, will change the fate of every American.

Does life imitate art?  You decide.

– On May Day, special counsel Robert Mueller’s questions for Trump became the lead story across all media platforms.  The questions, which could have been leaked either by the special counsel’s office or someone from Trump’s team, revealed an emphasis on obstruction of justice over Russian collusion.

– In an continuing effort to eliminate conservative voices from Facebook before the 2018 midterm elections, CEO Mark Zuckerberg said the company had implemented a system to rank news organizations based on “trustworthiness” in an effort to suppress content based on that metric and eliminate hate speech.

– Michael Caputo, a former Trump campaign consultant who lost his house to legal fees because the Democrats lost the 2016 election – damned them all to hell for their “witch hunt” congressional Russia probe.

– Deputy Attorney General, Rod Rosenstein, made it very clear that he and the Department of Justice were no longer subject to congressional oversight.

– After weeks of stalling and stonewalling by the U.S. Department of Justice and FBI, redactions were lifted on two pages of the Russia report.  Therein, it was revealed that both former FBI directors, James Comey and Andrew McCabe, believed that Trump’s former national security advisor, Michael Flynn, never lied in his statements to the FBI.  Therefore, the unredacted revelations also proved that Comey lied to Fox News’, Brett Baier, in an interview the week before.

– It was revealed that former Secretary of State, John Kerry, never actually stepped down from that position as he continued to conduct secret diplomacy on behalf of the shadow state; even to the point of attempting to salvage the Iran deal he helped craft.

– The U.S. National Security Agency (NSA) released a report revealing a sharp increase of U.S. call records.  The 534 million records of phone calls and text messages of Americans in 2017 were triple of what was gathered in 2016.

– The New York Times published an article on President Trump’s personal attorney, Michael Cohen, and labeled him a “fixer” who “built a shadowy business empire”.

– It was revealed FBI Director, Christopher Wray, had informed the Senate Judiciary Committee the FBI would NOT be investigating the illegal text communications that anti-trump FBI co-conspirators, Peter Strzok and Lisa Page, sent to each other on their personal devices.  This resulted in an angry response, with even more questions and demands, from Senator Charles Grassley (R-IA).

– President Donald Trump said he was he “fighting back” against the Russia probe and warned the “13 angry democrats” on the special counsel’s team regarding their “conflicts of interest”.

– “Allies and adversaries alike” worried about President Trump’s Tweet regarding his forthcoming announcement on the Iran nuclear accord; which caught “even most of his senior national security staff by surprise”.

– While “fighting for the democracy” and “for America”, California Congresswoman Maxine Waters shouted “damn this president” at a unionized workers rally in Los Angeles.

Obviously, there is a war going on in the highest offices of the land.  What moves, and countermoves, will be made next?

Could the elite bankers drop the stock market by 50% and, thus, create a blue wave in the midterm elections? Will Inspector General, Michael Horowitz, and the mysterious prosecutor, U.S. attorney John Huber, conveniently die in a plane crash as did the fictional presidential aide, Paul Girard, in the film Seven Days in May? Or, at the very least, will these men find allegorical bloody horseheads in their beds?

In the Seven Days in May film, the president withstood the coup, he emerged victorious, and the movie ended with a display of the U.S. Constitution.

Or will the global elite powerbrokers, and their deep state minions, succeed in burning down the United States so their New World Order can rise, like a phoenix, from the ashes?

Who, ultimately, has the real power?

5 thoughts on “Seven Days in May”