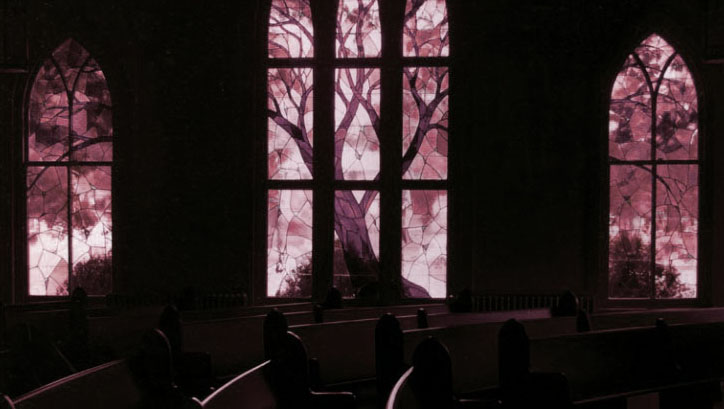 On Mother’s Day, my family and I attended a worship service at the church where my wife and I were married three decades ago. While sitting in the pew, waiting for the service to start, it struck me how little the nave had changed. Actually, from what I could see, it had not changed at all.

Traveling back in time, mentally, to the day I was married, I pictured my bride, the room, and the people in attendance.  I then imagined time passing outside in an array of flowing colors, similar to a DVD set on fast-forward; as the worship area remained unmoved and steadfast, like a super-sized stone stuck in the center of a rushing river.

As the congregation sang one of my favorite hymns, “Be Thou My Vision”, I saw colors of emerald, ruby, and amber on a display of stained-glass and envisioned a river of time gliding just beyond, over the last thirty years. I perceived changes, like shifting shorelines, and witnessed the passing of moments drifting away like clouds overhead, or people waving on the riverbank.

Children born, then growing up, then moving out.  Family and friends passing. Weddings and funerals and anniversaries. Confirmations and graduations. Old houses and new towns.

How strange the interior of the church remained as it was; unmoved as time’s river flowed like water through the center of a hollow rock and all around.

How strange to feel the river in me.

Like the church, I have also grown aged, and scarred, and weather-worn on the outside, while in many respects remaining unfazed within. I gazed upon my wife and children sitting next to me. I was blessed.

The river traveled beyond my comprehension.  It humbled me.

The sermon was about Martha the busybody and her sister, Mary, who sat at the feet of Jesus; how we’re all too preoccupied to enjoy and appreciate what should be most valued in life. The moral of the story, and the sermon, was to maintain the proper perspectives and to keep our priorities straight.

But, once again, my thoughts floated downstream like driftwood.

I thought of an article I read online that morning, by New York Times columnist, Maureen Dowd.  Therein, she conflated Trump to the swamp by way of innuendo, smoke and mirrors, and sleight-of-hand.  Lost in a feminine fog of mental busyness, she sardonically moaned through the warped lens of her twisted perspectives; because Donald Trump flipped her little world upside down.  Unsurprisingly, however, amidst all of her struggles, Dowd completely ignored the dangers, and the devils, still haunting the highest levels of the United States government; as well as the obvious conspiracy to circumvent a constitutionally elected president; another charismatic populist leader crucified.

In considering the piece, I concluded Dowd was either deceived or disingenuous. Either way, it didn’t matter.

So, I instead considered Trump’s immigration policies and the recent stabbings in Paris, France. I contemplated Europe and gun control; wars in the Middle East, and economic collapse.

I found myself wondering if the church walls, which were then surrounding my family, would withstand a societal breakdown; and I speculated if refuge could be found there in future days.

I recalled reading once how worship gatherings might soon become Sunday morning targets and remembered a scene from a movie where early-American parishioners were boarded up in a church and burned alive.

I wondered what I would do if active shooters entered the sanctuary and began to plink away at the congregants like the proverbial fish in the proverbial barrel.  Upon securing my family’s safety to the best of my ability, I wanted to believe that I would rush the nearest attacker head-on; that I would be brave, and that a strong offense was the best form of defense. I conjectured that I would hit the attackers hard, at full speed, even if taking bullets on the way. They would be neutralized and, in so doing, if I were to lose my life, the words of Lou Reed would then blaze, one last time, across my mind:

I’d look at this as a wondrous moment

To end this mystery….

I’d break up into a million pieces

And fly into the sun

No matter what happens, I’ve had a great life. For that, I am grateful.  Of course I have regrets.  Even so, I wouldn’t change a thing.

6 thoughts on “Meditations and Musings, in a Church, on Mother’s Day”