To those who are politically and cynically aware, the October Surprise designation has become a misnomer. Instead, these predictable events should now be termed October Inevitabilities, or, even, October Hand-Writings-On-The-Wall.

Just like the hands of an old-fashioned clock count down the minutes in circular certitude, so too do election years churn up the same old tired shenanigans meant to manipulate outcomes via emotions stimulated by media shock and awe.

For over two years, the Orwellian Media has ceaselessly shilled a phony Russian election-hacking narrative, perpetuated by a bogus special counsel investigation; even as both operations demonstrably overlooked the real election collusion between Hillary Clinton’s 2016 Campaign, the DNC, the FBI, and the Department of Justice.

More recently, our high-tech screens have relayed the magic manifestation of impoverished South American migrants spontaneously coordinating together and traveling thousands of miles; on track to arrive here just in time for the midterm elections on November 6, 2018.

Then, today, mail bombs were sent to prominent Democrats, thus allowing them all, one by one, to stand stoically before the cameras and sadly lament Trump’s leading the nation into white-supremacy and right-wing terrorism.

It should also be noted that none of the bombs exploded. Not one. Additionally, some of them were sent to the wrong Democrats at the wrong addresses; including one to CNN addressed to former CIA Director John Brennan. Both occurrences of which, in the eyes of the persecuted victims, surely affirm the perceived stupidity of the alleged Caucasian Terrorists. Undoubtedly, the devices could of have had boughs on them.

There is a total and complete lack of understanding at the White House about the seriousness of their continued attacks on the media. The President, and especially the White House Press Secretary, should understand their words matter. Thus far, they have shown no comprehension of that.

Unbelievable. The president of a media network that has vilified President Trump over phony charges of treason with Russia, has again pointed his crooked finger at Sarah Huckabee Sanders, the only White House Press Secretary in history to have required Secret Service protection.

Next, queue the same day’s 600 point stock market correction right on schedule; as the hits just kept on coming.

Whether by bombs, bullshit, or bear markets, who benefits?

Obviously, with the Orwellian Media, it’s all about the narratives; movies of the week.

Consider the Latin American Express:   All we need now is for a Gandhi-like figure to rise up before the cameras.  But, seriously, how hard would it be for either Mexican or American secret-agents to flatten a few tires or otherwise disable the vehicles? Of course, it would be very simple for even low paid mercenaries to turn that “caravan” into the unluckiest trip to hell, ever.

That would be something to see. But no.  It’s not happening.

Additionally, since Trump has made the case for national security, how difficult would it be for the boys and girls in our shiny billion-dollar super-secret surveillance facilities to track a few phone calls and bank transactions to see who’s pulling the strings?

But no. The drama just plays out like it always does as the simplest questions go unanswered and common sense solutions ever remain just out of reach. 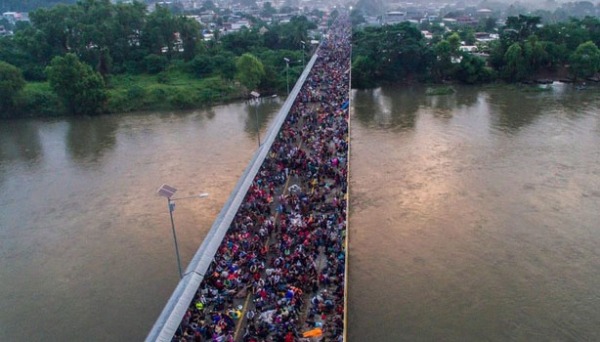 Isn’t it strange that the financial backers of the migrant caravan, who allowed for such terrifying visuals of a slow-motion national invasion, have made Trump, and his Republican supporters, the inevitable choice in the midterms? If the Independents were undecided before, they sure as hell aren’t now.

It seemed that Kavanaugh and the caravan had dissipated any predictions for a Blue Wave, but at least with the Honduran Mob, the Democrats still held out hope for a military engagement on the southern border, as a last minute game changer.

Either way, this particular movie of the week will force a final in-your-face consensus on borders, law, and national sovereignty.

Therefore, not only is the American Political Left ideologically bankrupt and with limited options currently, they also reek of fear.  Kind of like a boxer or UFC fighter who, in a match, first begins to consider (if not accept) that they MAY be outclassed.  Yes. The left is now seeing parallels to 2016 complete with overconfident pundits and pollsters, and with Trump still filling venues across the land.

Plus, now, another meme.

This time, though, instead of a green frog, it’s Non-Playable Characters (NPC). If there’s one thing liberals hate, it’s being ridiculed, and given its coverage in the mainstream press, the NPC meme appears to have hit a nerve.

I’m not a video gamer, but it seems Non-Playable Characters work on many levels in describing the Leftist Mob: They’re single dimensional, they repeat what they’ve been programmed to say in robotic ways, they can’t be engaged effectively, they lack originality and self-will, and they can’t change.

Worse yet, it now appears all of the Democrat’s heroes have feet of clay.  Obama spied on a presidential candidate, and that should have been no surprise because he warned how he’d bring a gun to the knife fight.  Remember that? More recently, just a few weeks ago, Hillary Clinton said:

You cannot be civil with a party that wants to destroy what you stand for, what you care about

Last year, a gunman upset over Trump showered the Republican congressional baseball team with bullets. Even so, Maxine Waters recently called for Trump administration officials to be harassed and Eric Holder has incited violence as well.

Now, it appears Robert Mueller has shot blanks, while Stormy Daniels and Michael Avenatti went down in flames, and even the Great White Native American hope, Elizabeth Warren, has met Custer’s fate.

Perhaps this is why the NPC meme resonates so much with Trump’s supporters: After all of that fail, the mob still rages.  Nothing can avert their zombie-like, blind animation, and this, in fact, hits at the heart of the NPC meme:  The overall creepiness is rooted in what has been technologically termed as the “Uncanny Valley”:

…the uncanny valley is a hypothesized relationship between the degree of an object’s resemblance to a human being and the emotional response to such an object. The concept of the uncanny valley suggests humanoid objects which appear almost, but not exactly, like real human beings elicit uncanny, or strangely familiar, feelings of eeriness and revulsion in observers.

In other words, the NPCs are soulless robots. Vacant. Look at their eyes closely and you’ll see there’s nothing there.

But in spite of everything, the mob knows it absolutely must win the midterms, no matter what. It’s either that or irrelevance, and I can’t think of anything they would fear more.

In the opinion of this blogger, the Red or Blue wave depends upon which team pulls the most from the vast sea of previously non-voting Americans. It’s a large segment of the population and one the media has been trying to radicalize on behalf of the Dems. However, it appears the opposite is happening: Just as Kavanaugh helped to pull Republican Ted Cruz ahead in his tight Texas race, so too might the Honduran mob doom Democratic Kyrsten Sinema in Arizona.

You would think the organizers of the Latin American Express would have thought that through, no? Unless they believe the silent majority in America now desires unceremonious suicide. Or maybe the globalists want the Republicans to win so they’re stuck with the full tab when the economy resets sooner or later.  But if the Dems win, then that, of course, would be a mere bonus whereby Trump could be inquisitioned.

I once debated someone in the fall of 2016 who said the election was over because the polls showed Trump as having no chance to win.  At the time, I argued the swarms coming out of the woodwork would crush the polls, and that’s exactly what happened in key electoral races.

So the question remains whether the hatred for Trump will override those now angered by Kavanaugh and the Honduran Mob; or, more specifically, how many of the great unwashed register and show up to vote.

There are also many Hispanics currently in America who feel just as threatened by the never-ending southern invasion as do Deplorables.  After all, they’re here and got theirs. People are greedy and don’t want to share. That’s human nature regardless of color.

This means more Hispanics could vote for Trump than the so-called experts might realize.

The same goes with blacks. The economy alone might cause them to go Full Kanye in the privacy behind the polling booth curtain.

At the same time, it’s also quite feasible the hatred for Trump is stronger than anyone realizes.

In any event, if the mail-bomber turns up wearing a white hood, they will be proven very stupid indeed, for jumping the gun and unnecessarily throwing weapons into the game.  A game, in fact, their team was winning. Of course, in this scenario, the media will NOT report how the right-winged elephant was poked first.

On the other hand, if this was another desperate Hail Mary by Trump’s opponents to even the playing field before the midterms, it will backfire bigly.

Here’s how to tell:  If the suspects are right-leaning Caucasians, we’ll know very soon.  If not, it will become another never-ending movie of the week.

No matter what, though, just as during the 2016 Presidential Election, the pundits and pollsters are now stumbling around in the dark; shining their lights into the same old dusty and musty basement corners after all of the occupants have vacated the premises.

5 thoughts on “Robotic Optical Mail Bombs in the Uncanny Valley”