The craft sat floating, alone on a dark sea, drifting away from a billion suns, the nearest reflecting its light around the ship’s outer perimeter. In the shape of a sphere, the craft turned on an axis unseen, in silence, as lights flickered over its surface like synapses firing upon a living brain enveloped in the still tranquility of black ether.

Within the craft, chaos reigned and the atmosphere smelled of sweat, smoke, blood and fear. In the technology room that housed the ship’s communications and computing centers, there stood ten figures wearing black, hooded robes. The faces beneath each hood could not be seen inside the dark room, but occasionally, the whites of their eyes would flash beneath their hoods like the flicker of knives in moonlight.

The Overlords were troubled.

Anxiety filled the room like static and the cacophonous din of their conversations revealed desperation, frustration and dread. Arms were raised frequently to expose pale hands, clenched fists and pointing fingers. To an outside observer, the whole scene would have appeared as the dark ritualized choreography of an ancient druidic dance. As the chaos of discordant discussion reached a fevered crescendo, a very tall hooded figure entered and said: “QUIET”. A hushed silence filled the room.

“Please sit down everyone,” the Chief Overlord said as he remained standing.

“Engineering, what is the status?”

The Senior Engineer stood and respectfully bowed before the Chief Overlord.

“As you know sir, it’s been two months since the mutiny. Captain Donald has secured the bridge and ostensibly, controls both security and defense. He appears to have taken us off course and continues to navigate the ship towards the new destination.”

“How far have we drifted from the original coordinates to One World and what measures have you taken to put us back on course?” queried the Chief Overlord dimly.

“Well sir,” the Senior Engineer responded tentatively. “The Overlords and the Ministers of One World still retain the support of several crew members and a good percentage of the passengers. Measures both overt and covert are being taken to subvert the efforts of Captain Donald on multiple levels. Still, his support among some of the crew and many passengers remains strong. It seems both he and his supporters believe his stewardship of the bridge to be ethically in line with the mission’s original charter.”

“But there is hope, sir,” continued the Senior Engineer.

“Recently, Officer McCain told the crew and passengers on Europa Deck that Captain Donald’s leadership is in “disarray”. Furthermore, because we retain control over the ship’s communication systems, we believe our disinformation campaign will continue to erode support away from those currently at the helm.”

“Yes,” the Chief Overlord agreed. “We must continue in our efforts to win the hearts and minds of both the crew and passengers.”

“Absolutely, sir. And, fortunately, most of the crew overseeing the ship’s internal surveillance is still on our side.”

“Good,” replied the Chief Overlord. “We will use that to our advantage.”

Just as the Chief Overlord finished his sentence, a female voice was heard overhead: “Sir, I have Former Captain Hussein from the Hollideck. May I send him through?”

Waving the Senior Engineer to sit down, the Chief Overlord said: “Yes, patch him through now.”

At that moment, a hologram appeared in the center of the room and there stood a coffee colored man wearing a short-sleeved shirt, plaid golf shorts and standing behind what appeared to be a sand wedge.

“May I be of service Master?” said the holographic man from the Hollideck as he looked down, leaned forward, and bowed submissively.

“Yes, Barry. Minister Soros has recently briefed me of your assistance in organizing against Captain Donald. Your continued service will be required in redirecting our navigational coordinates back towards One World. Do you understand?”

“Yes, Master,” replied the hologram in a deferential manner.

“What is the status of the Infected Ones located in the Center Fuel Depositories?” asked the Chief Overlord.

“Well, as you know sir,” replied Captain Hussein, “those who are currently with Captain Donald continue to resist our efforts to assimilate the Infected Ones across the upper decks. As we continue to create division among the ranks of the crew members and lower-tiered passengers situated in and around the Center Fuel Depositories, many are now choosing to migrate upwards. Fortunately, we are having much success on Europa Deck thanks to the diligent efforts of Minister Soros and Officer Merkel.”

“Good,” said the Chief Overlord. “What about Amero Deck?”

“Unfortunately, sir, we are meeting some resistance there,” replied the hologram. In spite of our best efforts to stage various protests using some of the passengers who side with us, Captain Donald retains strong support among his followers. Evidently, many of the people living on Amero Deck believe the Infected Ones could spread the infection throughout their quarters. Many there even believe those on Europa Deck might soon be bowing to an imaginary moon god, wearing bedsheets for robes, placing towels over the faces of their women and seeing many heads separated from bleeding necks.”

“Indeed,” muttered the Chief Overlord bitterly. “Little do they know; resistance is futile.”

“Yes sir. However,” continued the holographic Hussein, “although Captain Donald tried to seal off the passageways from seven of the rooms within and surrounding the Center Fuel Depositories, our strategically placed Ministers of Justice were allowed to access the affected systems in order to override those attempts”.

“Okay. That’s all for now Captain.” With that, the Chief Overlord waved his right hand as the hologram disintegrated into tiny fractals of three-dimensional light before dissipating into digital puffs, like vanishing sparks from a dying fire.

Then the Chief Overlord’s voice filled the room: “Security, Compensation, and Food Distribution, front and center!”

“Yes, sir!” the three hooded figures replied in unison as they quickly assembled before the tall silhouette that towered above them.

“Do all procedures remain ready and do you still retain the loyalty of your respective crew members?”

“Good,” stated the Chief Overlord. “You will await my command. I will decide when the time is right. Do you understand?”

As the Chief Overlord stared out the porthole into the black vacuum of space, he said: “Compensation will be the first to go. No credits will be issued to either crew or passengers. Food Distribution will then be terminated, except for those required to facilitate our final plans.” 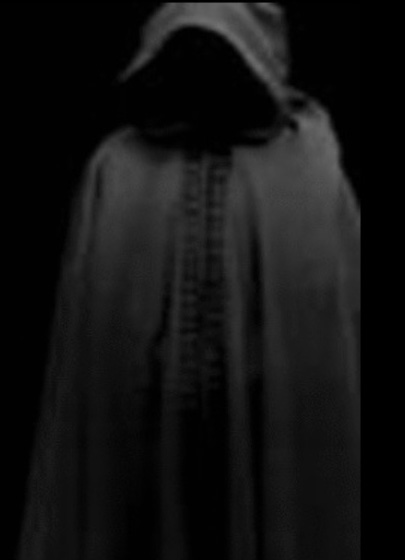 Returning his gaze to the hooded figures in the room, he continued: “The time has come to test the loyalties of those who have placed their faith in Captain Donald. At the same time, we will inflame the rage of those who dream of a new start on One World.”

“Yes, sir!” chanted all ten of the hooded figures in unity and with what sounded to be only one voice.

“Security, are you prepared for what ensues?” the Chief Overlord asked, his voice steady.

“Yes, sir!” replied the Head of Security. But what about the crew and passengers on the Russian and Asian decks, sir?”

“They will agree to assimilation, or death, before we reach our final destination,” stated the Chief Overlord grimly.

He continued: “Our vision will be our guide; the Singularity, our salvation. The ship is ours and our will be done. You soon will all see One World, spinning as a wormhole beneath its Event Horizon.” As he spoke, the Chief Overlord pointed with one hand to the hooded figures all now standing before him and towards the porthole with the forefinger of his other hand.

Then he pointed to the entrance door of the room and said, “But before we reach One World, our ongoing sustainability objectives must be attained.”

In a menacing tone, he added:  “This means most of the people on this ship will die.”

“Yes, sir!” chanted all ten of the hooded figures once again, in unison.

One thought on “Lost in Space. Out of Time.”